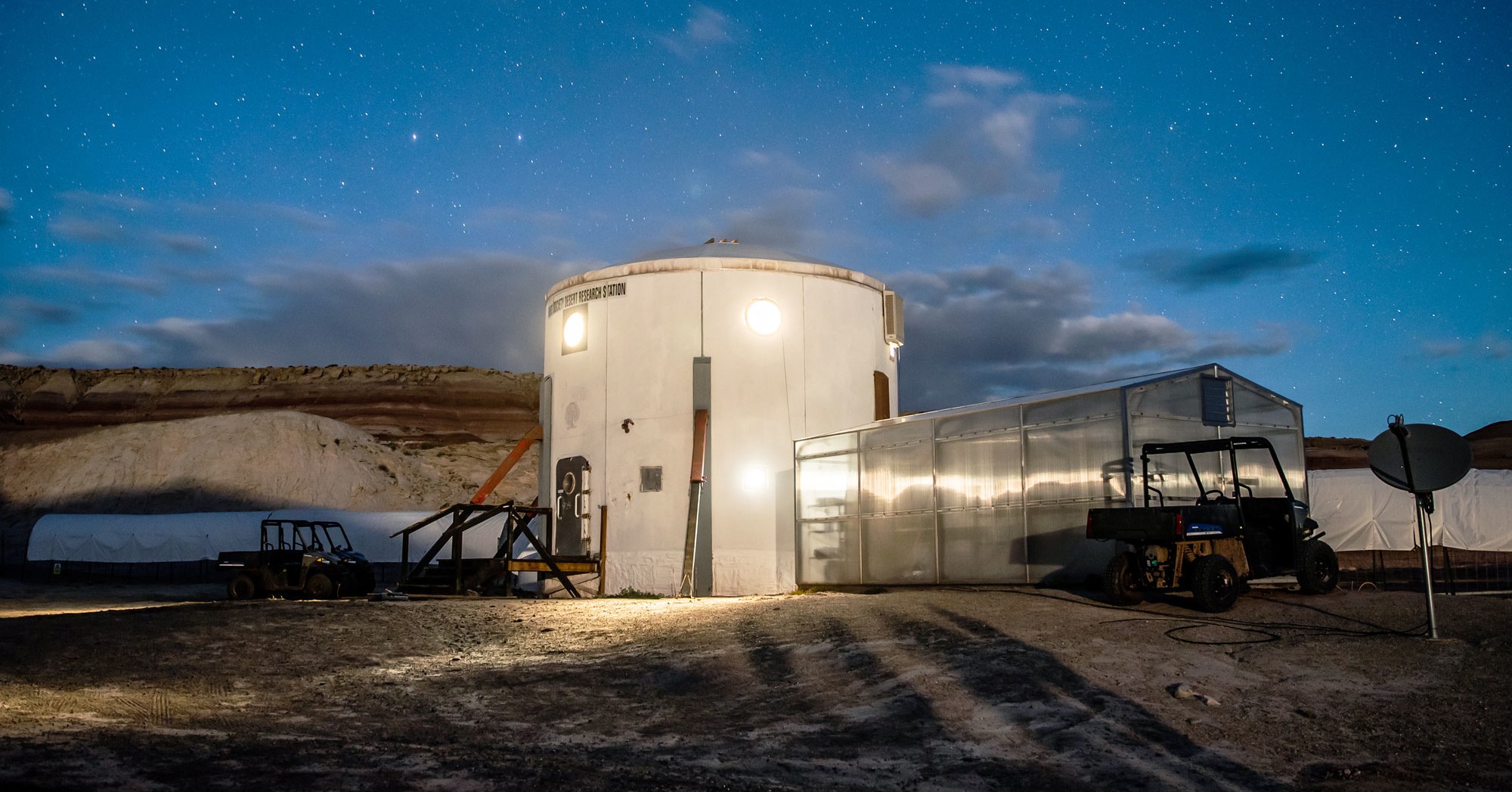 Ben Easter was delighted with the way his students were performing. He was especially delighted that a husband had just voted to kill his wife. The couple were both enrolled in the Martian Medical Analogue and Research Simulation, a continuing-education course for medical professionals who wanted to learn about health care in space by pretending to practice medicine in pretend space.

Here’s how that marital rift came to pass: About seven miles outside of Hanksville, Utah, a man stood inside a grain-silo-like building that he and the crew called the Hab. On the other side of the door stood his wife. She begged for entry, but he remained adamant: He could not let her in.

The Hab is part of the Mars Desert Research Station. Since the station set up shop in 2001, it has provided short-term housing to more than 1,200 cabin-fevered people pretending to be astronauts—participants in various projects simulating life on the Red Planet. They hole up in the Hab for days, weeks, or months. When they enter the red-rock desert beyond the airlock, they don spacesuits—a “the ground is lava” scenario for space types. They jostle around on ATV rovers. It’s meant to seem real-ish, you know. Serious stuff.

And the man was taking it seriously: That’s why he didn’t want to let his wife, or the others just beyond the airlock, back inside. In this fictional scenario, she and her companions had been contaminated with radiation, and the insiders were debating whether to let the particle-drenched crew come home. One person inside wanted to let them in; the other was neutral; the man held firm to no, marital status and post-simulation fallout be damned. “We have to think about keeping the people who are healthy, healthy,” he said.

Easter, a professor of emergency medicine at the University of Colorado Anschutz Medical Campus, sees this couple’s actions as a success story for the course, which he helped found a few years ago: The simulation had enough fidelity that even romantic entanglements went out the airlock in favor of Mars-dilemma realness. (Another interpretation, of course, is that it didn’t have enough fidelity, and he knew he was not actually abandoning and condemning his wife. But that’s not how Easter saw it.) Easter, who has run the course since 2015, offered a new version for engineering students last month.

All actually-real Mars dilemmas lie very far in the future, of course. But Easter thinks we should start preparing for the medical realities of the Red Planet. In the past, space agencies took extremely healthy people and sent them to space for a little while. “The chance that they have a serious medical event is relatively small,” says Easter. “Most of the risk of human spaceflight is in launch and landing and hardware problems.” That’s not true on a Mars trip, which would have plenty of radiation, psychological unknowns, spacesuit-ripping rocks, leg-breaking descents, regular stuff like cardiac arrest, and no practical way for Earth to intervene.

Read More:  ‘I was sexually abused as a child’

When Easter first approached the Wilderness Medical Society to pitch this course, the society kind of shrugged. “They felt that the type of people who were really interested in spending time outdoors would not sign up to live in a tin can for a week,” says Easter. But they convinced the organization to post a notice on the website anyway. If no one signed up, no one signed up.

It was full in 24 hours (turns out, people who like hard things do so indiscriminately). Each day of the course features Mars-applicable lectures about topics like radiation, hyperbaric medicine, contingency planning, and the psychological difficulties of isolation and confinement. Then, the crew receives a realistic task that requires them to slip on their spacesuits for extravehicular activity (EVA). While they’re stuffed into their oxygenated sausage casings, something (of course) goes wrong with someone’s body.

Emergency physician Alicia Tucker, who lives in Tasmania, took part in 2017. She’d worked as a physician on Antarctica-bound boats and in the Royal Flying Doctor Service, which provides care for people in the remote Australian Outback. She liked the challenge of remote medicine and the what-you’ve-got-is-what-you’ve-got-ness of it. PseudoMars seemed like the ultimate manifestation of that concept.

Since taking the course, Tucker has decided she probably won’t be going to Mars—humans have too much to figure out—but she can help make spaceflight, long or short, safe and accessible for the next generation, for her kids. She recently became an aviation medical examiner, a job that includes among its duties doing medical examinations of pilots, and she’s embarked on a diving and hyperbaric medicine fellowship, the kind of pressure-based knowledge needed for rocket-powered journeys. One day, she hopes to help out with the medical end of space tourism.

But after running the course for people like Tucker, Easter realized that he couldn’t just preach to the Hippocratic choir. A Mars mission will take all kinds, and everyone onboard, regardless of background, should probably know how to deal with decompression (etc.). Could you take a bunch of aerospace engineers, he wondered—used to hardware and software and not the wet messiness of humans—and teach them medicine on Mars?

To find out, he worked with Allison Anderson at the University of Colorado Boulder, a bioastronautics specialist and professor of aerospace engineering, to develop a course called Medicine in Space and Surface Environments. Last month, they took their first batch of 21 students to the Mars Desert Research Station. That’s too many for the Hab, so they camped in tents outside—lowering the fidelity but perhaps increasing the difficulty: It was often 40 degrees, often raining, unusual and unexpected for May in the Utah desert. Windstorms flattened their tents. (You’re engineers, Easter told them: Fix it.)

Read More:  How To Benefit From A Jogging Watch Posted By : Dennis Clay

On the group’s first EVA, the professors sent the students on a mission behind a big canyon wall, where they lost communications with the Hab. So the second day, they set up a relay station: The Habbers could broadcast to a high point, the high point could relay the message down to those in the field below. Voila: Rock wall vanquished.

But while the field team was trekking down from the peak, a preselected student tripped, fell, and started screaming the kinds of screams your parents told you not to scream unless you were in real trouble. The student rolled 15 feet before he stopped, afflicted with a “broken” femur. The students, who’d just 12 hours before learned how to carry an injured person, had to splint his leg and get him back to base.

That, though, was just the beginning: “Your ability to assess someone in a spacesuit is pretty limited because if you remove any part of that, they die,” says Easter.

That problem hit home for participant Arika Armstrong, an aerospace engineering graduate student who also works full-time for Lockheed Martin on the new GPS-III satellites. “You can’t give them an injection,” she says: You’ll expose them to bad air and killer pressure. “You can’t give them CPR,” she continues: They have a hard plate over their chest. For the most part, you just have to get them back to the manufactured earthliness of the Hab, safely.

They did that … a lot. “It was safe to assume that any time you went on an EVA, something was going to happen to someone,” she says. And indeed: Spacesuits tore, people wandered off, limbs broke, breathing became a problem, joints sprained, crew members got too hot or too cold, and they had to perform CPR. That’s when the different philosophies of martian and terrestrial medicine seemed stark. “You’re trained to continue CPR until definitive care arrives,” she says. “The difference on Mars is you are the definitive care. Earth isn’t coming to help you.”

“I have died a number of times on Mars,” says Easter, who is often the plant in the course’s medical scenarios.

Read More:  12 Frozen Foods You Should Avoid at All Costs

When he’s not playing the victim and doing his University of Colorado work, Easter is often out at Johnson Spaceflight Center, working concurrently as a scientist for NASA’s Exploration Medical Capability division. As part of the work, he runs probabilistic risk-assessment models to figure out which medical conditions will be the biggest and most frequent problems in future spaceflight. “We then compare this information to the resources that would be required to address those conditions,” says Easter, “and use this comparison to make recommendations about the design of the medical system for exploration missions.”

For the far future, he’s got some ideas: using on-demand videos for specific procedures, so astronauts don’t learn how to fill a cavity in 2025 in Houston and never do it again until in deep-space 2029. (After all, if you can change your tire courtesy of that guy on YouTube, why can’t a spacefarer fix a human the same way?) Maybe 3D space printers could make the sort of suture a split elbow needs, exactly when the elbow needs it. Maybe those printers could spit out the needles or forceps, too. And what if those materials could be decontaminated and recycled, turned later into tweezers and surgical stitches?

All of that sits firmly in the chronological distance, as does Mars itself. For now, what Easter and his colleagues have is the Desert Research Center, simulated sickness, simulated death, simulated attempts to keep the former from becoming the latter.

Usually, when Easter “dies,” the team gets straight down to the debrief. The simulation is over. But one time, the crew kept going. They found something to cover his body; they joined hands; they had a memorial service.

Despite his last name, if this were Mars, he would not rise again. And that, perhaps, is one of the most important lessons here: not just how to maintain health but how to deal with death when it comes for space explorers, as it will for every human who stays Earthside.