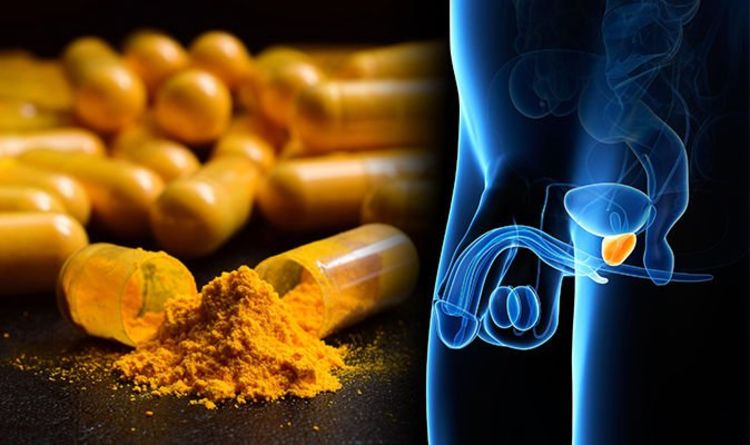 Prostate problems affect one in three British men over the age of 50.

These problems include urinary problems, such as needing to pee more often, which is often triggered by an enlarged prostate.

An enlarged prostate isn’t always an indicator of prostate cancer, and is usually caused by hormonal changes.

There are several lifestyle changes you can make to improve prostate health, according to Holland & Barrett – one of these is adding turmeric to your diet.

The high street health store explains: “Turmeric is the bright yellow spice used in curries, but it is curcumin – the active compound in turmeric – that is now begun gaining scientific attention, mainly for its anti-inflammatory properties.

“A pilot study published in Italy’s Panminerva Medica in 2012 followed 33 patients with BPH given curcumin supplements for six months.

“Researchers found these men had fewer symptoms, improved urine stream and better quality of life than those in the control group.

“According to researchers from the Seoul National University College of Medicine, curcumin may also help the body naturally reduce the effect of certain compounds that lead to prostate enlargement.

“Still not convinced? A 2015 study published in the journal BMC Complementary and Alternative Medicine concluded that curcumin both hindered the development of BPH and could be considered a ‘functional food’ to help relieve the symptoms of BPH.”

Turmeric is available in supplement form, but it should be noted supplements shouldn’t be used to replace medical care.

Before trying any remedies you should always check first with your GP.

Some research shows men with prostate cancer who took vitamin D supplements had a drop in their PSA levels.

Cancer Research UK explains: “The PSA is a protein in the blood called prostate specific antigen.

“The PSA blood test is used to help diagnose prostate cancer as well assess how well the treatment has worked.

“But the evidence is not strong enough to say that vitamin D supplements can reduce the risk of cancer coming back.”

A healthy diet from an early age can ensure a healthy prostate in later life.

Eating the right foods associated with a healthy diet should be your first port of call – five fruit and vegetables a day, starchy foods like potatoes, bread rice or pasta, some dairy, beans, pulses, fish eggs, meat and other protein, and unsaturated oils and spreads.

Supplements have risen in popularity over the last few years and there are claims and research which demonstrates they can help with a range of health conditions.

Vitamin B is one of the most important groups when it comes to health function of the body.