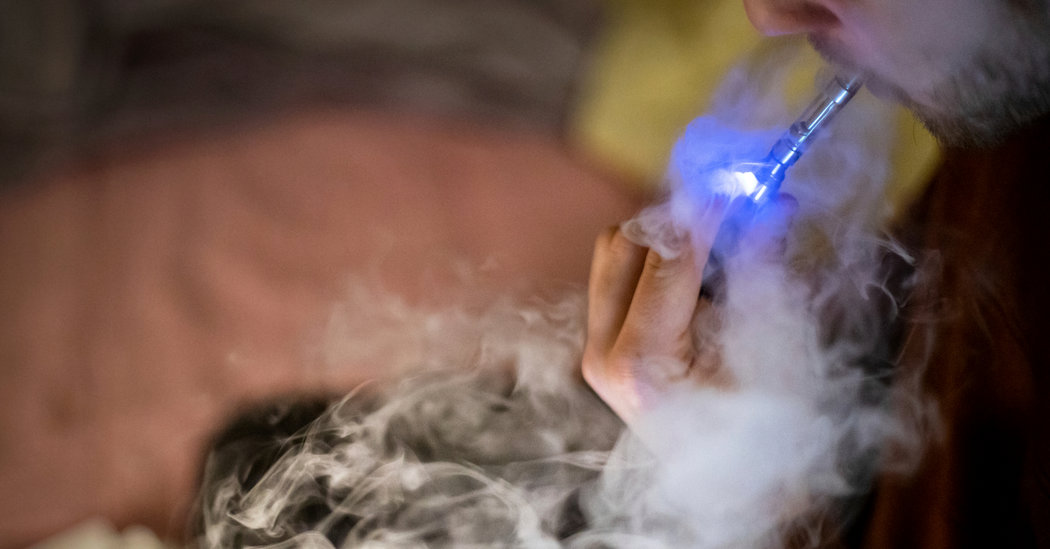 Nearly three dozen young people have been hospitalized around the country in recent weeks for severe respiratory problems after vaping either nicotine or marijuana, stumping doctors treating them.

The Illinois, Minnesota and Wisconsin public health departments are investigating these cases and at least 20 additional emergency admissions that doctors suspect are related to vaping some substance, possibly even illegal street drugs or adulterated liquids laced with T.H.C., the ingredient that produces marijuana’s high.

There are also cases in California, which appear to be associated with vaping cannabis or cannabidiol oil.

Most of the patients were having difficulty breathing when they arrived at the hospital. Some patients also reported chest pain, vomiting and other ailments. The cases have ranged in severity, with some patients suffering severe lung damage that required weeks of treatment in the intensive care units.

Each of the patients reported using e-cigarettes or other vaping devices in the weeks leading up to the emergency. But officials are not yet clear whether vaping caused the injuries, and if so, what ingredient in the e-cigarette or vaping systems was responsible.

“We know the children have been injured. We don’t yet know the causative agent,” said Dr. David D. Gummin, medical director of the Wisconsin Poison Center, and professor and chief of medical toxicology at the Medical College of Wisconsin. “We have no leads pointing to a specific substance other than those that are associated with smoking or vaping.”

Initially, Dr. Gummin said, doctors suspected that the patients were suffering from an infectious disease. But the patients’ failure to respond to antibiotics led the doctors to believe they had been harmed by a toxic substance. A common practice among their patients was vaping.

“The individuals who have become sick have been very forthcoming about some of their recent history,” he said. “Those that have been able to talk have been able to give us some leads, though unfortunately not enough to point us in a specific direction.”

One hypothesis, said Dr. Gummin, is that the teenagers had purchased a nicotine or cannabis-derived vaping product that had been used once, and then refilled with dangerous substances that would be hard to detect. The Wisconsin Department of Health Services reported 12 confirmed and 14 suspected cases of vaping-related illnesses, including severe lung damage in people who reported recent vaping or “dabbing,” which is vaping marijuana oils, extracts or concentrates.

The Wisconsin health officials also said that patients reported using open-tank systems and devices with interchangeable cartridges. Open systems allow users to concoct their own brews of vaping liquids, if they want.

Dr. Emily Chapman, chief medical officer for the Children’s Minnesota hospital system, said that in the last month or so, it had treated four cases of acute, severe lung damage — including respiratory failure — in teenagers who had been vaping. Although the hospitals’ patients have each shown improvement, Dr. Chapman said, it’s not clear if they will fully recover.

She also noted that investigating a teenager’s vaping patterns can be tricky.

“The risk here is that if people are presenting to hospital emergency rooms, or urgent cares, they either may not think of vaping as something that is threatening and may not include it in their history,” Dr. Chapman said. “Or if asked directly, they may not be comfortable sharing that.”

Dr. Chapman also said she was concerned about how much of the public believes that vaping is safe.

“The truth of the matter is, we have so little experience with vaping, relative to the experience we have with cigarettes and cigars. Recall how long it took us to figure out that cigarettes were linked to lung cancer. There is so much we don’t know.”

One recent study from Yale and Duke identified chemicals called acetals in some Juul e-cigarette liquids. Those chemicals, the researchers said, may be especially irritating to the lungs and can cause damage when inhaled.

Juul disagreed with the study’s conclusions.

Juul pods contain high levels of nicotine, which can cause addiction and health problems. Some experts worry about the effects of nicotine on a developing teenager’s brain, and some studies have suggested that nicotine ingestion can also affect the heart and arteries.

The state public health departments are working with the Food and Drug Administration, and the Centers for Disease Control and Prevention, to determine what is making the victims sick.

“The agency is working with state health officials to gather more information on any products or substances used,” said Michael Felberbaum, an F.D.A. spokesman. “We encourage the public to submit detailed reports of any unexpected health or product issues to the F.D.A.”

Read More:  Be Safer With These Great Residence Safety Ideas