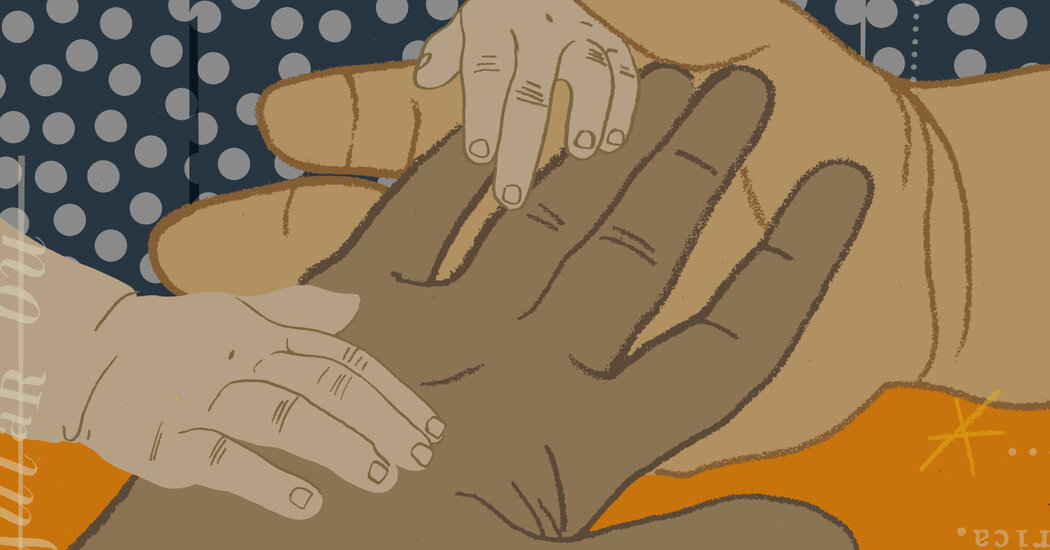 If strangers ask me how many children I have, my answer is complicated.

I birthed two children and am working on raising them to be really good humans. But I also mothered a third child for a year and a half, and I can’t just erase that relationship. I’ll answer “Two, a boy and a girl,” and then launch into the verbal eruption of: “We’re also foster parents and we had a placement for 18 months and we also do respite care for other foster families, so the number of children is sort of fluid.”

When my husband, Ian, and I were starting the process to become foster parents, people called us “saints” and “great people.” Some told us that they could never do it.

“How can you open yourself up for heartbreak?” they said. “How could you let yourself love someone that you know is going to eventually go away?” If that was true, I thought, why bother to ever love anyone at all, given that death is the ultimate, and inevitable, defection from another. You love, even though you know that somehow, someway, it’s going to go away. You take that risk, because not taking it means you’ll never know the reward.

Fostering was not a huge leap for us. My husband’s parents were foster parents, his mother was a social worker, my stepmother was an adoption worker, both of my parents were special education and elementary schoolteachers and, in her second act, my mother became an Episcopal priest. Though both of us were raised to help others, I tended toward the sacrificial, while Ian was more thoughtful and set boundaries, characteristics that could be at odds when making important life-changing decisions.

I was still coming to terms with that almost a year ago, as I watched our first foster child’s little body run toward me, his short legs pumping hard as his arms lifted up for a hug. “Muckin!” he hollered — his version of my name, Megan. I scooped him up and snuggled my nose in his cropped hair. He burrowed his face into the crook of my neck and sighed.

Then he turned, pointing at his family walking up behind him: “Mama! Dada!” I smiled and exhaled, trying to let go of the guilt that had lingered through the past year since he left.

This wasn’t the first time my husband and children and our foster son and his adoptive family had gathered together for a family dinner or party. His adoptive parents, a loving, kind and generous couple with two girls of their own, have made incredible efforts to call on birthdays and holidays, and to include us in milestones.

We have become a thoroughly modern family; the kids all refer to each other as cousins, a simple way to explain the complex bond. Before the pandemic, we met for ice cream and pool parties, lacrosse games and piano recitals. FaceTime kept us connected when we needed to stay physically distant, and when we could finally gather together this summer, we became part of each other’s bubble.

Our foster child was 5 weeks old when he arrived at our house in a bucket car seat, bundled up for a cold December evening, scented with formula and baby powder.

As he grew in our home, the snow of December turned into the mud of April and the sun-filled days on the beach in Martha’s Vineyard in June. We documented every milestone, hoping that he would someday be able to look back on his time with us and know that it was filled with love. He took his first steps and said his first words and figured out how toys and body parts and feelings worked.

The primary goal, we were told in our foster care training classes through the Massachusetts Department of Children and Families, or D.C.F., was to make every attempt to reunify the family. Children in foster care, they told us, should have a path toward either reunification or adoption. Foster families are meant to be a temporary safe space while the biological family creates their own safe space for the child to return.

Read More:  Having Kids and Its Effect on Mom’s Dental Health

Foster parents have to balance being the child’s de facto parents and loving the child with that totality, and giving themselves some emotional distance, knowing that at any moment the child could leave.

As part of the reunification effort, I dutifully packed the baby’s diaper bag for visits and met his social worker in the parking lot of the D.C.F. offices to hand him off for an hour or two. He’d return to our home smelling different, wearing clothes that were too big, but that had been picked out by the woman who had carried him in her womb for nine months. She could not give him much in the way of shelter or care, but she could show up for an hour at a time and give him love.

Those visits began to become more sporadic and then nonexistent, and the baby’s temporary placement with us stretched into a year and a half.

Periodically, I’d receive notification, both electronically and in the mail, that a review was scheduled, and I’d either go and report on the baby’s progress or I would relay that information to our social worker to present. And then we received a letter in the mail from D.C.F. asking if we would consider adoption.

This letter was a formality; we had already decided months earlier, that despite that great love that we felt for him, and knowing that we were going to be asked, that we were not going to adopt. We had taken on this awesome responsibility to be a bridge between his previous life and his future one, not to be his final destination.

But I had misgivings. As we had done with other major decisions, Ian and I had worked through the pros and cons of adoption, the risks and rewards, but in this situation it felt as if we were constantly at an impasse.

I grieved, loudly at times, for the family of five that we could have been, the guilt and the “what-ifs” of how the baby would turn out because of this decision. I wanted, needed, to see this through, and adoption seemed like the only logical ending. Deciding that we couldn’t parent another child, even though it was the best thing for everyone in the long run, felt like giving up to me.

We loved this little baby who brought such joy to our lives, but when we thought about a family who wanted to open their hearts and lives up through adoption and who had begun a process to do so with that explicit goal in mind, we realized what a gift we could be giving them to complete their family. Even if it meant going through the inevitable heartbreak when he left our home.

We’re now “Muckin” and “Eeean” to this little boy who asks to see our “beep beep” — the smoke detector — when we do our weekly FaceTime visits and always asks when he can come to our house to play. He’s had sleepovers here where my son and daughter shower him with play time and snacks and snuggles and he methodically goes through the house, checking to make sure everything is where it once was. At 3, he has a burgeoning vocabulary, and I’m sure as he gets older the questions will come about why he lived with us, and then moved to live with Mommy and Daddy and his big sisters, in a life that is wide open with possibility.

And I hope our answer, our very basic and honest answer, that we did everything for him out of love, is enough.

Megan Birch-McMichael is a writer, wife, mother and bookstore manager.