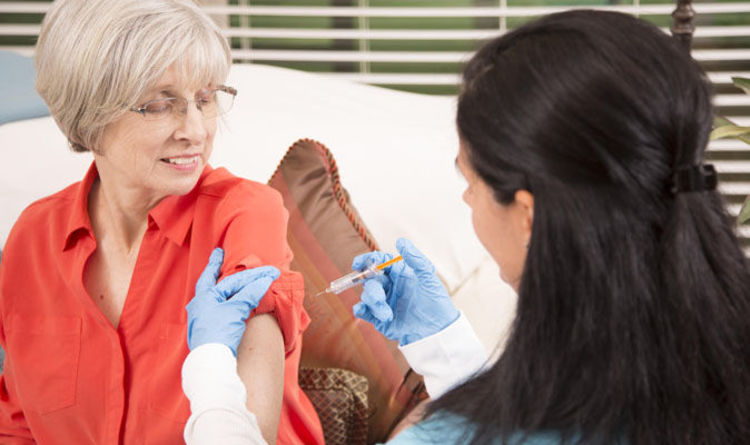 There had been widespread concern not enough doses had been ordered to meet demand with shortages put down to a problem with suppliers. But vaccines have now been delivered to surgeries and pharmacists that placed an order on time – with England’s chief nurse saying there was plenty for everyone to be protected. The vaccine is free to those over 65, pregnant women and those with long-term medical problems.

Professor Jane Cummings said: “Around 8.5 million doses of vaccine have been ordered with around one million surplus doses available.

“The current uptake rate in those 65 or over is 45.2 per cent so we are keen to see an increase in that figure.

“As well as older adults, and those with long-term conditions, we want other at-risk groups such as pregnant women and young children to be protected as well. It’s certainly not too late for people to get vaccinated.”

While many millions across England will receive the jab, there is concern over NHS staff who refuse to have the vaccine in the mistaken belief it gives them flu.

Of the 1,027,547 healthcare professionals offered the vaccination last year, just over two thirds or 706,075 received it.

Prof Cummings said a failure to have the jab could expose already seriously ill patients to a potentially fatal illness that spikes in winter.

Up to 50 per cent of staff may have the flu virus at any one time but be asymptomatic.

This means they may not feel ill and be unaware they are carrying the virus. It comes after a seriously ill leukaemia patient being treated in isolation was given flu by an unvaccinated healthcare worker.

The rate for healthcare workers was just 68.7 per cent. Public health bosses claim this year’s vaccine could prevent at least 700 hospital deaths, more than 2,000 hospital admissions and 30,000 GP consultations in those aged 65 and over.

Professor Helen Stokes- Lampard, chair of the Royal College of GPs, said: “We know there has been some confusion around the delivery of influenza vaccinations. But all orders should now have been received in full.”

TEST THAT CAN SPOT INFECTION

A NEW test that can diagnose flu in just 20 minutes could save the NHS £24million a year.

Patients currently have to wait for samples to be sent to a laboratory, meaning results can take several days and those suspected of having flu may be unnecessarily put into isolation.

But the “cobas Liat” test involves adding a swab sample taken from the nose and throat to a test tube containing reagents.

It is then scanned to give a quick diagnosis.

Geoff Twist, managing director for Roche Diagnostics, which developed the test, said it led to “significant reductions in the number of unnecessary admissions, blocked beds and bay closures” during an initial roll-out at two hospital trusts.

Berenice Constable, head of nursing at Kingston Hospital NHS Foundation Trust, said: “This has had a big impact on improving timely treatment for patients.”