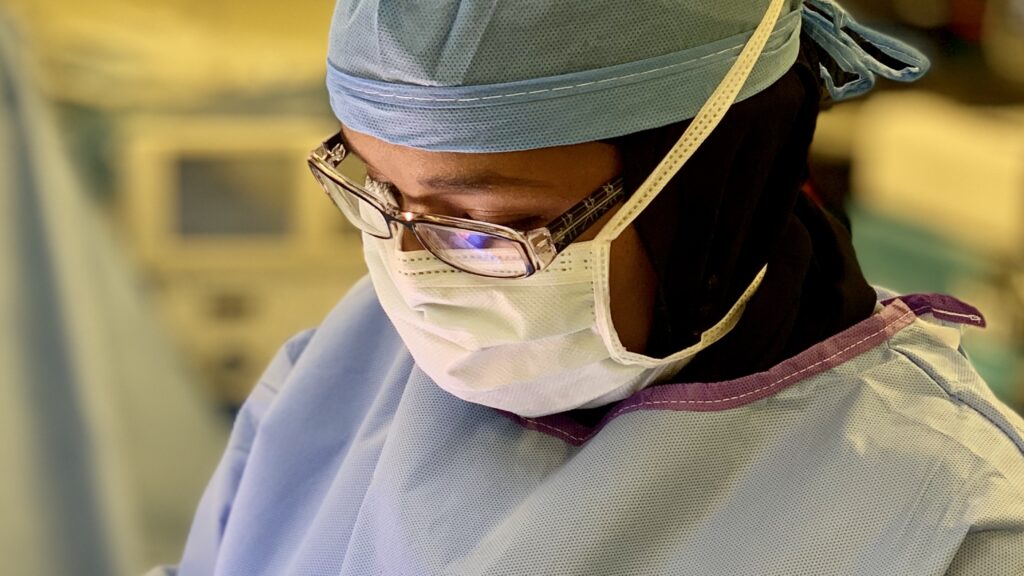 Women who become doctors must often choose between motherhood and medicine. I’m a mother and a surgeon. I never thought of choosing between the two, even though my employers often asked me to.

Today I work as a trauma surgeon in a busy practice. It’s been a long journey since the day five years ago when I sat outside the office of the chairman of surgery at a prestigious hospital to interview for my first job.

As my husband and I dressed our children for day care that morning, I felt proud to show them that their mom could follow her dreams. After six years of grueling training, I was finally going to be a trauma surgeon.

Wearing a long black skirt and matching hijab, I felt confident going into the interview. There was a shortage of trauma surgeons, and I had excelled in my training. My patients did well, my outcomes were good, my evaluations were outstanding. I had aced test after test.

Pregnant with my sixth child, I went to the interview knowing I could do the job, that I had survived all the times supervisors told me to quit because I couldn’t be a mother and a surgeon.

The chairman of the department who conducted the interview didn’t see things the same way I did.

“You’ve accomplished nothing over the past six years,” he said, tossing my curriculum vitae across the long mahogany table. In spite of my recommendations, my publications, and my training, once I mentioned my children he felt that I didn’t have the right “focus” to practice in an academic setting.

I’ve learned to deal with the overt discrimination that comes with being a visual minority in medicine. When I was denied access to the operating room as a third-year medical student because of my hijab, I knew it was up to me to open the door. I learned to maneuver through the system until my presence became routine.

Resistance against motherhood, on the other hand, seemed to be a tornado that only gained strength with time. When I was a newlywed surgery intern, a senior female resident told me that “anyone who chooses to get pregnant in a surgery residency is selfish.” When I became pregnant with my first child a month later, there were no well wishes and I was told I should quit.

“It’s never been done, and it’ll never be done,” a faculty member said. “The last pregnant resident in the program was a third-year resident, and she still hasn’t come back from maternity leave six years later.”

When I asked about the maternity leave policy, I was told there was none. And when I asked why there wasn’t a policy, especially with a previously pregnant resident in the program, I was answered with an embarrassed silence.

The opposition to my pregnancy made me anxious. I found it hard to sleep at night. I cried in moments of solitude. I wanted to share my fears about losing my residency position, but I didn’t want to show weakness. Obsessively reading surgery textbooks late at night was the only thing that calmed my nerves.

When I returned from maternity leave, I was eager to improve, to show I was serious about my career. I asked the attending surgeons questions at every opportunity. They remained skeptical.

In response to one of my questions, a supervising surgeon responded, “I don’t know why you’re going through the trouble. You’ll never finish this training, and even if you do you won’t be productive.”

After I told my colleagues about my second pregnancy, another supervisor complained to one of my male resident colleagues, “These damn girls! All they do is f— things up by coming here and getting pregnant.”

No matter how well I performed as a surgeon, my “choice” of motherhood was seen as a shortcoming. With each pregnancy, I was advised to pursue more “family-friendly fields” since my “priorities had changed.” But surgery remained my dream.

Although women have comprised more than 50% of medical students since 2017, motherhood continues to be a problem because the hospitals and clinics where we work haven’t changed to accommodate us. The decision to have a family is complicated by the fact that there is no standard approach to how the medical field deals with pregnancy, whether that’s in medical school, residency, fellowship, or professional practice. Hospitals are chronically understaffed in residency training, and maternity leave is seen as an undue burden on residents’ colleagues. By the time most women finish residency, they may have only a few years left to get pregnant, and hundreds of thousands of dollars of debt to consider.

Even among women who don’t plan to have children, the possibility they might have children can be used against them when being considered for a position. A mentee of mine was recently asked in a fellowship interview if she planned to start a family. Although such a question is illegal, there was no way for her to answer, or even report the question, without jeopardizing her career.

A recent JAMA article showed that young women physicians cut back their work hours at substantially higher rates than men in an effort to reduce work-family conflicts, especially if they have children. Fatherhood, on the other hand, is not an obstacle. My male colleagues were celebrated when they became dads, which I appreciated but found infuriating.

Read More:  What are the best medicine for depression

A New York Times article recently described medicine as a stealth family-friendly profession that offers flexibility and part-time work. Family-friendly is not the medicine I know. As a surgeon in training and a mother, I constantly had to push back against the suggestion that as a mother I could never be interested in a demanding field or work full time.

The Times article glorified the fact that hospitals and clinics “allow” women to work part-time, letting us care for our families and continue to work. It minimized the fact that we are paid thousands less for the same work as men (about $ 41,000 less a year in surgery). It also did not mention that “part-time” in medicine can easily mean 40 to 50 hours a week of work, much of it unpaid.

The article also missed the reality that while some women choose the part-time path, others must go that route because medicine continues to be an inflexible field. It forces some women to abandon their true passions and settle for scraps: lower pay, fewer opportunities, and less career advancement. It’s no surprise that top leadership positions in medicine are still dominated by men.

The onus to fix these issues should not be on those who are affected by it. But unless women and their allies demand and drive the necessary changes, they will never happen.

The solutions start with acknowledging this discrimination and having honest conversations about how to do better, not by glorifying the status quo.

Qaali Hussein, M.D., is a board-certified trauma and acute care surgeon practicing in Florida and mother of six.