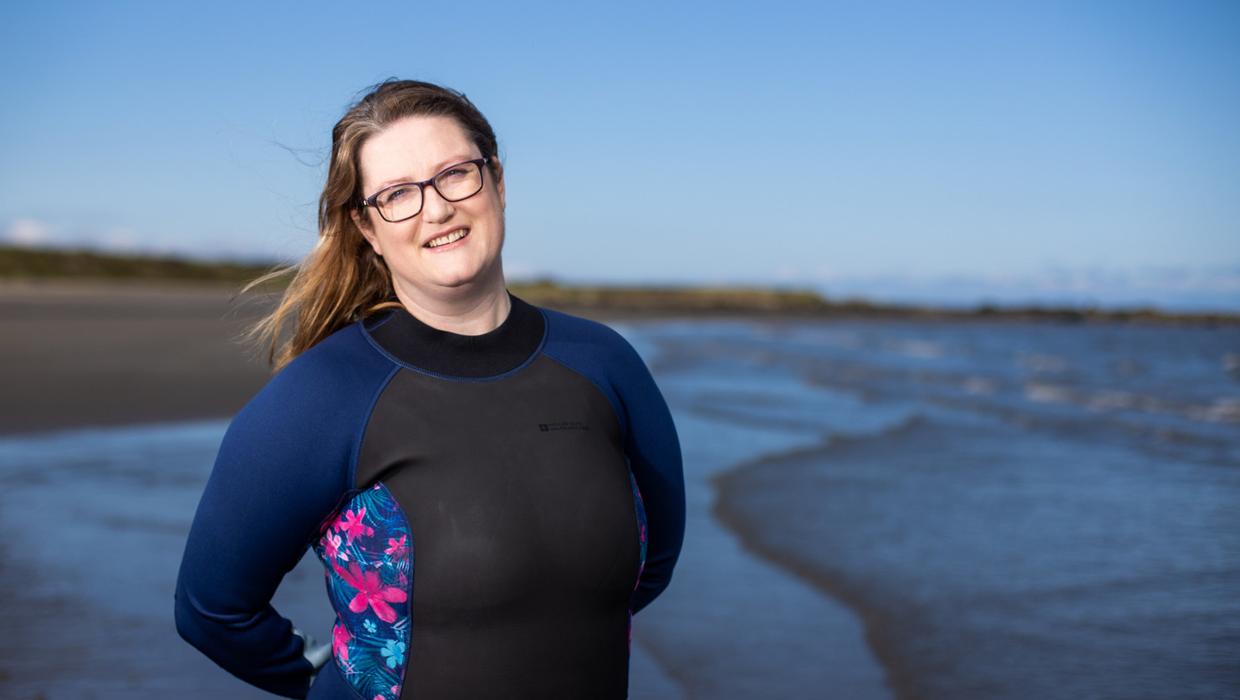 As a Mam to two boys, over the years I became an expert at minding ‘the stuff’ on the sidelines, edge of activities, and the beach. Minding stuff is an important job. It normally involves taking care of a bundle of jerseys, shoes, bags of kit, some snacky bits, and encouraging family members on with a roar of, “Yes, I see you, you’re doing great.”

As a stuff minder your duty is not only to mind all the things, but also to observe and encourage your mindees. You can sometimes take out your phone, but only to take photos, because the minute you fall down a social media rabbit hole you will have missed the most spectacular feat by one of your children. Missing it is not an option because if you do, the miniature interrogators will weasel it out of you and you will never be forgiven. Ever.

While the kids and my husband enjoyed activities to the utmost, I would slump myself into a spot and mind the stuff. Thrilling.

Years of hang-ups about my body image and abilities led to this rut I found myself in and every time I sat at the edge and observed, the rut got deeper. This was my place and it was better that way.

What if somebody saw me; my body? What would they say? I have a plus-sized body which isn’t always deemed to be acceptable in society. Being overweight is associated with laziness, sloth, gluttony, and should be hidden.

What if I wasn’t able to do the things the kids could do? Would I hold them back?

Three years ago I decided that I wasn’t going to look in the mirror so much or worry about what size clothes I was wearing. I noticed that I was being sucked into negative social media, felt bad about myself, and generally wasn’t happy. So I resolved to get out and get active regardless of how I looked.

I will never forget my first night out walking in earnest. I went out at 9pm, well after dark, in case somebody saw me. I huffed and I puffed my way around the flattest road in the town with my husband. At the end I physically felt worn to my bones – but mentally I felt amazing. I realised that exercising was the key to keeping my moods in check and de-stressing after a long day at work.

Let’s do a marathon he said that evening. I roared laughing at the audacity of me doing a marathon having struggled to walk 4km on the first night of exercising in earnest for a long time. Never mind a plus-sized me who rotated two pairs of leggings and two running bras because it was difficult to find ones that fitted correctly.

I signed up for the marathon the following day and yes, a year later I completed Dublin City Marathon. I was still plus-sized, yes, but I was far fitter than I had ever been before. Exercising was now firmly part of my life. Focusing on my ability rather than my body image was the key to getting out the door and achieving the goals I had set.

Still I hung back when we went out with the kids, carrying my hangups about my body image and ability. On summer holidays, I’d avoid things like waterslides and mind the all-important stuff in a corner under an umbrella. If the eight-year-old said he wanted to climb a sand dune, I’d come up with an excuse and hover around the bags at the bottom.

What was worse was that the kids stopped asking. They assumed that I wouldn’t be part of their fun activities. Not because I wasn’t able but because I always said no.

This year was different, however, although I never set out to make it that way. Working from home with the combined complication of home-schooling two children (one of whom has special educational needs) meant I was barely out of the home office and exercise took a back seat. My physical activity was nearly zero and as a result my mental health suffered.

At the end of April, with all summer holidays cancelled, we decided to make the most of the Irish Sea on our doorstep and buy wetsuits for the boys so they could swim in all weathers. We have a beautiful bracing sea close-by that is best enjoyed with some sort of thermal protection, trust me.

The boys’ (including my husband) wetsuits arrived and the first day they were christened I stood in the shallows with my trousers rolled up over my knees, bellowing encouragement and threats that they shouldn’t dunk one another in equal measure. They were having a wonderful time. I wasn’t.

Resentful of their merriment and feeling left out, I got home and started looking for a plus-sized wetsuit. Prices ranged from hundreds of euro to one that cost €65 before postage. I’ve often spent more than that on a pair of shoes that I would wear less. I clicked ‘buy’ and put in all the details, mentally pushing myself to do it, with the nagging doubts whispering in my ear.

A week later the wetsuit arrived and we headed for a swim at high tide. I gingerly stepped into the water and beyond my knees for a change. The combination of the sea water and the wetsuit added to my buoyancy and the laughs with my family left me feeling recharged and I floated out of the sea to the house.

The difference since I took the plunge has been remarkable. It turns out that the most precious thing I had been worried about was not the stuff – it was me. I no longer mind things on the beach or at the side of activities. Bits and pieces get lashed into a bag and we don’t take valuables with us anyway.

I may never be at peace with my own body image but I am at peace with my body’s ability. In the last number of years I’ve had children, run a marathon, and been under incredible stress. If I could bear all of these things, putting a wetsuit on and getting in the sea is small fry in comparison.

Rather than chasing a perfect body image or family situation, I’ve come to a point of acceptance. I am who I am, and the main reason for holding back in participating was in my head and never my body.

This time last year I sat in my rut and watched my world pass me by without being a part of it.

I don’t want to let that happen again.

The Boots Night Walk will take place next Monday, September 7 – you choose the location and time of your 5km walk and everyone walks together from afar. Anyone wishing to join in and do their own Night Walk by registering and fundraising online at BootsNightWalk.com. All funds raised will go towards the Irish Cancer Society Night Nursing service, which provides end-of-life care for cancer patients in their own home, allowing them to pass away at home surrounded by family and loved ones as well as giving much needed respite for the family caring for them.