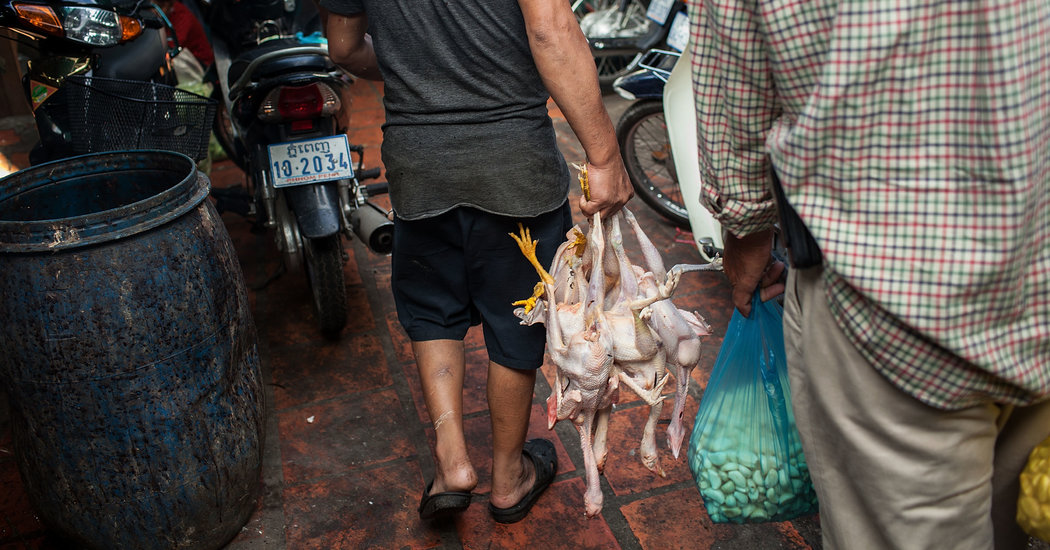 In a move that worries many public health experts, the federal government is quietly shutting down a surveillance program for dangerous animal viruses that someday may infect humans.

The United Nations Environment Program estimates that a new animal disease that can also infect humans is discovered every four months. Ending the program, experts fear, will leave the world more vulnerable to lethal pathogens like Ebola and MERS that emerge from unexpected places, such as bat-filled trees, gorilla carcasses and camel barns.

The program, known as Predict and run by the United States Agency for International Development, was inspired by the 2005 H5N1 bird flu scare. Launched 10 years ago, the project has cost about $ 207 million.

The initiative has collected over 140,000 biological samples from animals and found over 1,000 new viruses, including a new strain of Ebola. Predict also trained about 5,000 people in 30 African and Asian countries, and has built or strengthened 60 medical research laboratories, mostly in poor countries.

Dennis Carroll, the former director of USAID’s emerging threats division who helped design Predict, oversaw it for a decade and retired when it was shut down. The surveillance project is closing because of “the ascension of risk-averse bureaucrats,” he said.

Congress, along with the administrations of George W. Bush and Barack Obama, were “enormously supportive,” said Dr. Carroll, who is now a fellow at Texas A&M’s Bush School of Government and Public Service.

“But things got complicated in the last two years, and by January, Predict was essentially collapsed into hibernation.”

The end of the program “is definitely a loss,” said Peter Daszak, president of the EcoHealth Alliance, a nonprofit global health organization that received funding from the program. “Predict was an approach to heading off pandemics, instead of sitting there waiting for them to emerge and then mobilizing. That’s expensive.”

The goal of Predict was to speed up and organize the previously haphazard hunt for zoonotic diseases — those that may jump from animals to humans. In recent years, scientists have discovered many lethal viruses lurking in wild and domestic animals.

It has long been known, of course, that AIDS originated in chimpanzees and probably was first contracted by bushmeat hunters. Ebola circulates in bats and apes, while SARS was found in captive civet cats in China.

Read More:  Why Calcium Propionate Is Strongly Linked to Diabetes and Autism

In South Asia, Nipah virus reaches humans through pigs or date palm sap infected by bats carrying the virus. In Saudi Arabia, MERS also is carried by bats; they infect camels, which then infect humans. The virus can jump from human to human, especially in hospitals.

Novel influenza viruses originate in migratory ducks and geese. The viruses spread first to domestic poultry flocks, then to pigs and humans. Mutations picked up along that viral highway can render the viruses far more dangerous.

These discoveries led to new ways of preventing spillovers of infections into human populations: closing markets where wildlife is butchered for food,; putting bamboo skirts on sap-collection jars to keep bats out; or penning pigs and camels in places where they cannot eat fruit that bats have gnawed.

Predict teams have investigated mysterious disease outbreaks in many countries, including a die-off of 3,000 wild birds in a Mongolian lake. One team proved that endangered otters in a Cambodian zoo were killed by their feed — raw chickens infected with bird flu.

A Predict laboratory helped identify bat-borne viruses that a boys’ soccer team might have been exposed to while trapped for weeks in a cave in Thailand.

Allowing Predict to end “is really unfortunate, and the opposite of what we’d like to see happening,” said Dr. Gro Harlem Brundtland, the former prime minister of Norway and former World Health Organization director-general.

She was co-chair of a panel that in September issued a report detailing the world’s failure to prepare for pandemics. “Americans need to understand how much their health security depends on that of other countries, often countries that have no capacity to do this themselves,” Dr. Brundtland said.

Even though USAID is “incredibly proud and happy over the work Predict has done,” the program is closing because it reached the end of a 10-year funding cycle, said Irene Koek, acting assistant administrator of the agency’s global health bureau.

“We typically do programs in five-year cycles, and it had two,” she said. Some similar research will be part of future budget requests, “but it’s still in the design-and-procurement cycle, so exactly what will continue is a bit of a black box.”

In mid-October, the agency said it would spend $ 85 million over the next five years helping universities in Africa and Asia teach the “one-health” approach that Predict used. (“One health” describes the nexus between animal, human and environmental medicine).

But it will not involve the daring fieldwork that Predict specialized in.

Among the institutions that worked on Predict projects are those staffed by wildlife veterinarians and disease-trackers like the University of California, Davis’s One Health Institute; the EcoHealth Alliance; the Wildlife Conservation Society, which runs the Bronx Zoo; the Smithsonian Institution, which manages the National Zoo in Washington; and Columbia University’s Center for Infection and Immunity.

Some Predict projects will be taken over by other government agencies, such as the Pentagon’s Defense Threat Reduction Agency or the National Institutes of Health. But those agencies have different missions, such as basic research or troop protection. They do not share USAID’s goal of training poor countries to do the work themselves.

As an agency that gives money to countries, USAID often has a friendlier, more cooperative relationship with governments in poor nations than, for example, Pentagon-led efforts might.

“I’ve always been impressed with the way they were able to work with ministries of health,” said Dr. James M. Hughes, a former chief of infectious diseases at the Centers for Disease Control and Prevention who was on Predict’s advisory board. “They have a high level of trust, and they help countries comply with the International Health Regulations.”

(Those regulations, in force since 2007, require countries to report all major disease outbreaks to the World Health Organization and allow the W.H.O. to declare health emergencies.)

USAID still supports some health-related programs like the President’s Malaria Initiative and the President’s Emergency Plan for AIDS Relief. But Dr. Carroll described those as “cookbook portfolios.”

How to fight those diseases is well-known, he explained, so the agency just comes up with a budget for drugs, diagnostic kits, insecticides, mosquito nets, condoms or other long-established interventions.

It can be highly specialized work. Getting blood samples from pigs or wild rodents is fairly routine, but catching birds, bats or monkeys alive is not. Gorillas are harder. (Scientists usually content themselves with just collecting gorilla feces.)

Predict also experimented with novel ways to catch and release animals unharmed, to transport samples without refrigeration and to use DNA testing that can scan for whole viral families instead of just known viruses, said Dr. Christine Kreuder Johnson, associate director of the One Health Institute at the University of California, Davis.

Predict sponsored epidemiological modeling to predict where outbreaks are likely to erupt. It also sought ways to curb practices, such as hunting for bushmeat or breeding racing camels, that encourage eruptions.

After that West African Ebola outbreak, Predict researchers determined exactly which bat species carried the Ebola Zaire strain that caused it. Another team in Sierra Leone discovered a new strain of the virus, now known as Ebola Bombali.

The Zaire strain was found in a bat that roosts in caves and mines, said Dr. Jonathan Epstein, an EcoHealth Alliance veterinarian, while the Bombali type was in a species that roosts in houses.

Distinctions like that are important for telling people — especially people who eat bats — which species are dangerous.

“We generated an illustrated book on how to keep bats out of houses by putting screens on windows or mesh below the roof thatch,” he said. “That’s the kind of thing Predict paid for.”

Predict served as a proof of concept for a much more ambitious idea that Dr. Carroll proposed several years ago: the Global Virome Project, which envisioned trying to compile a genetic atlas of all the viruses circulating in all animals. By some estimates, there are more than 800,000 such viruses waiting to be discovered.

Many scientists questioned the wisdom of spending as much as would be needed to do that — over $ 3 billion. But those experts also argued that Predict, which is focused on viruses dangerous to humans, was very much worth the relatively modest amounts of money it cost.

“Predict needed to go on for 20 years, not 10,” Dr. Epstein said. “We were getting to the point of having a trained work force that could gather animal samples and labs that could test for unknown viruses, not just known ones.”

“Once it stops, it’s going to be hard to maintain that level of proficiency.”