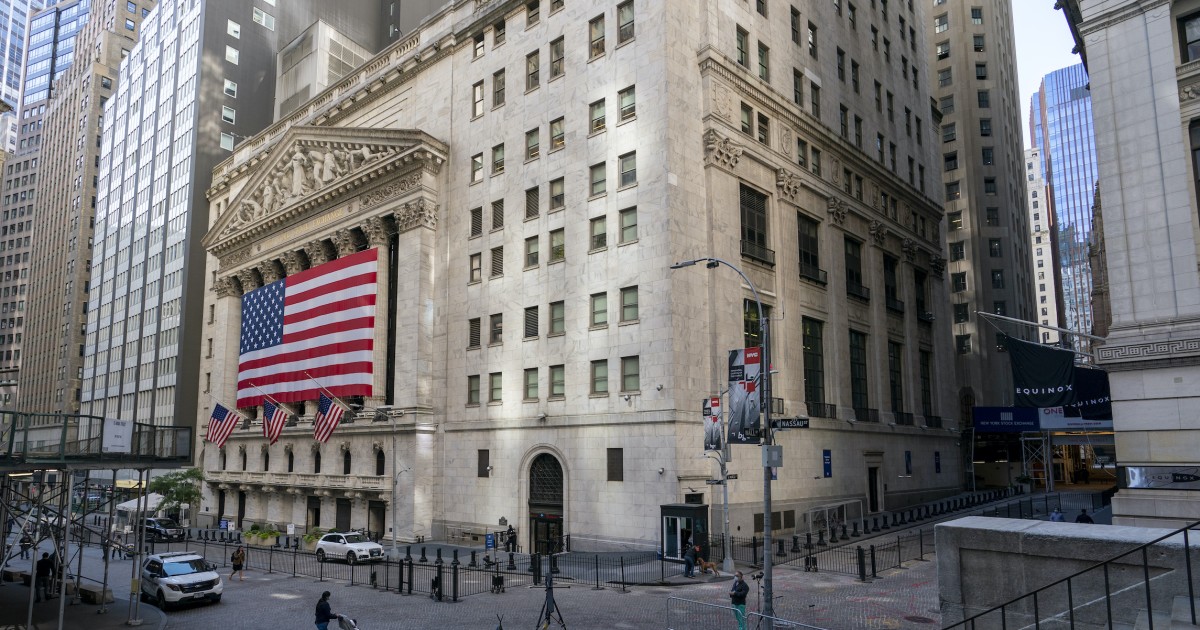 CEOs said they worry that economic recovery will stall if Washington fails to approve another relief package, hours before stocks accelerated losses through the end of the day.

“Further major support from the federal government is necessary to prevent economic recovery from being derailed,” said Joshua Bolten, CEO of Business Roundtable, the group of big-business CEOs that released a survey of its members Wednesday.

The survey found that an increasing number of executives expect growth in sales, hiring, and capital spending in the third quarter. However, those projected gains hinge on another economic relief package.

The survey notes that “CEO plans remain fragile and recovery requires more support to be sustained and accelerated.” It also found that an overwhelming majority of them, 76%, don’t expect operations to return to pre-pandemic levels until at least 2021.

Talks between Democrats and White House officials over another relief package have stalled, and House Speaker Nancy Pelosi signaled last week that she is done negotiating with the GOP.

Meanwhile, stocks slid by the end of the day Wednesday, ending an advance that began on Tuesday. The S&P 500 sank 2.4%, and the Dow fell 1.9%, led by a decline in information technology sectors. Amazon, Apple, and Netflix fell precipitously at over 4% each.

To date, more than 6.9 million coronavirus infections and more than 201,800 deaths have been confirmed in the United States.

All other vaccines currently in trials would require two doses, which are usually given a month apart. The two doses, each a month apart, would make the job of inoculating the public more difficult as not everyone will follow up with the second dose.

The Johnson & Johnson vaccine will also not have to be stored at sub-zero temperatures. However, the company is a few months behind other vaccine makers. Pfizer and BioNTech recently announced that the phase three data for their vaccine may be ready for analysis as soon as Sunday.

Top government health officials told members of the Senate health committee Wednesday that they would all be willing to receive a coronavirus vaccine once one is proven to be safe and effective, as concerns among the public remain about the safety of the accelerated development process.

Food and Drug Administration Commissioner Stephen Hahn said during the hearing that approval of a vaccine would not be determined by politicians, but rather, career scientists. Democrats both on and off the committee have questioned whether politics dictate the vaccine approval process instead of science.

Centers for Disease Control and Prevention Director Robert Redfield brushed off senators’ concerns about the agency’s frequent changes to COVID-19 guidelines. He downplayed reversals of CDC guidelines on asymptomatic testing in August as well as on coronavirus transmission methods this week.

“The intent of that document [in August] … was never to limit testing of asymptomatic individuals,” Redfield said. “The attempt was to reengage the medical and public health community, as part of testing, so that there was a public health action that happens as a consequence of every test.”

Read More:  Where will i see weight loss first

Redfield denied that the information that appears on the CDC’s site is inaccurate and told the committee that guidelines can be modified “if the data and science changes.”

Preliminary data suggests that coronavirus transmission among younger schoolchildren may not prove as severe as public health experts feared. The first set of data published on the National COVID-19 School Response Data Dashboard developed by Brown University researchers to track coronavirus outbreaks in schools showed that only a fraction of students and teachers had been diagnosed with the coronavirus from Aug. 31 to Sept. 13.

“These numbers will be, for some people, reassuring and suggest that school openings may be less risky than they expected,” Emily Oster, an economist at Brown University, told the Washington Post.

The quality of case reporting is not uniform across the U.S., meaning scientists don’t have a full view of how each state is faring in controlling COVID-19.

“I don’t think that these numbers say all places should open schools with no restrictions or anything that comes close to that,” Oster said.

Missouri Gov. Mike Parson has tested positive for the coronavirus, becoming the second governor in the U.S. to contract the virus, the Kansas City Star reported.

“Right now, I feel fine, no symptoms of any kind,” Parson said in a video posted to Facebook. “But right now, we just got to take the quarantine procedures in place.”