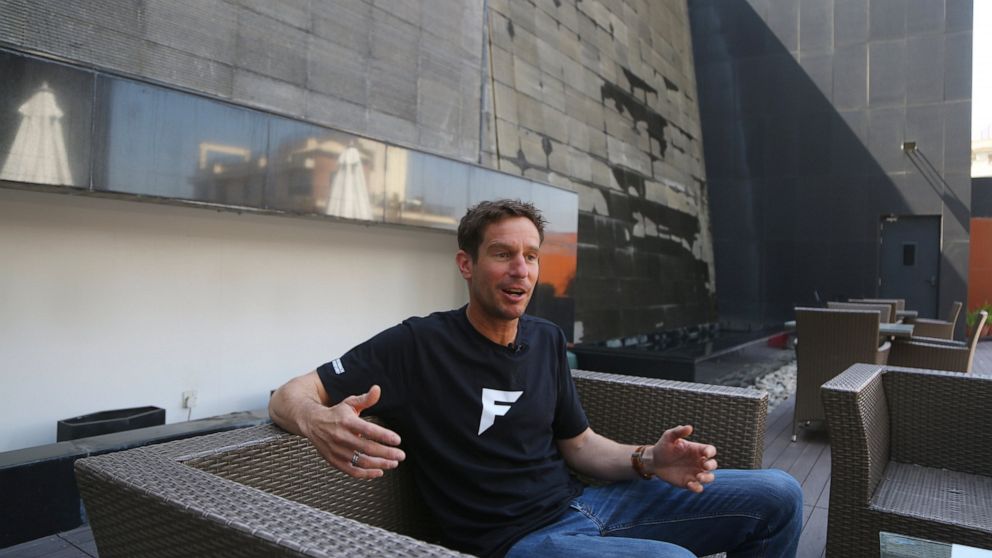 ISLAMABAD — Pakistan’s prime minister has summoned troops to help police implement social-distancing rules as a part of new measures aimed at containing the spread of coronavirus.

Prime Minister Imran Khan said Friday that daily confirmed cases and deaths from COVID-19 were steadily increasing in the country.

Khan made his televised comments at a meeting convened to consider strict anti-infection measures.

The prime minister said he was not imposing a lockdown for now but that he would close down cities if Pakistan started facing a situation line in neighboring India, which is reporting record-high numbers of confirmed cases.

The warning from Khan came hours after Pakistan reported 144 deaths in the previous 24 hours. It has reported a total of 16,842 deaths among 784,108 cases since last year.

Earlier, a top health official said Pakistan’s hospitals were being flooded by the steady increase in patients.

— Drop in U.S. vaccine demand has some places turning down doses

HERE’S WHAT ELSE IS HAPPENING:

KATHMANDU, Nepal — A Norwegian climber became the first to be tested for COVID-19 in the Mount Everest base camp and was flown by helicopter to Kathmandu, where he was hospitalized.

Erlend Ness told The Associated Press in a message Friday that he tested positive on April 15. He said another test on Thursday was negative and he was now staying with a local family in Nepal.

Mountain guide Lukas Furtenbach, warned that if safety measures are not taken, the virus could spread among the hundreds of other climbers, guides and helpers who are now camped on the base of Everest.

Furtenbach, leading a team of 18 climbers to Mount Everest and its sister peak Mount Lhotse, said there could be more than just one case on the mountain as the Norwegian had lived with several others for weeks.

Any outbreak could prematurely end the climbing season, just ahead of a window of good weather in May, he said.

BERLIN — Dozens of German actors have posted videos to protest government policies in the coronavirus pandemic, drawing criticism from some of their colleagues.

Actors who are prominent in the German-speaking world, including Ulrich Tukur, Volker Bruch, Meret Becker, Ulrike Folkerts and Jan Josef Liefers, posted their clips, some of them ironic or satirical, on Instagram or YouTube on Thursday. They used the hashtag #allesdichtmachen – “shut everything down.”

This week, the German parliament approved legislation mandating uniform restrictions in areas where the virus is spreading too quickly, including closures and a 10 p.m.-5 a.m. curfew. Many cultural facilities already have been closed for months.

Read More:  The push for interoperability gains new urgency in 2019

The video protest drew sharp criticism from some other German actors. And satirist Jan Boehmermann posted a link to a documentary about a Berlin intensive care unit on Twitter, with the comment: “The only video you should watch if you have problems with the corona containment measures.”

BUDAPEST— Hungary will allow outdoor terraces at restaurants and bars to open Saturday and plans further openings next week, even as the COVID-19 death rate in the country remains among the highest in the world.

The number of people who have received at least a first dose of a vaccine in Hungary surpassed 3.5 million Friday, a threshold earlier set by the government for when outdoor seating areas could reopen.

In a morning radio interview, Prime Minister Viktor Orban said that number was likely to reach 4 million next week, when a new round of openings would be extended to holders of an “immunity certificate” proving they’ve received a vaccine or recovered from the disease.

Hungary’s government has tied its reopening strategy to the number of vaccines it administers. Around 35% of the population has received at least one dose, the second-highest rate in the European Union. But the country has had the highest number of COVID-19 deaths per million inhabitants in the world for over a month, according to Johns Hopkins University.

On Friday, Orban announced that theaters, cinemas, gyms, swimming pools, spas, zoos, museums, libraries and sports events will be opened next week for those who hold a government-issued immunity certificate. Hotels and indoor dining at restaurants may also accept certificate holders.

JERUSALEM — Israel and Bahrain say they have reached an agreement to recognize each other’s coronavirus vaccination certificates, allowing travelers between the countries to forgo quarantine and other restrictions.

The agreement builds on a U.S.-brokered normalization accord reached last year and marks a further improvement of ties between Israel and the small Arab country in the Persian Gulf.

Bahrain’s Foreign Ministry said in a statement Thursday that the latest deal “represents a global precedent for a bilateral agreement on mutual recognition of vaccination certificates.”

Israeli Tourism Minister Orit Farkash Hacohen welcomed the agreement in a tweet, calling it “an important step in Israel’s reopening to tourists.” She said she looked forward to hosting her Bahraini counterpart again and invited him to go diving in Eilat, on the Red Sea.

Israel has carried out one of the most effective vaccination campaigns in the world, leading to a sharp drop in infections and allowing it to reopen schools and businesses, including restaurants, hotels and museums.

But it remains largely closed off to international visitors. Israel plans to allow a limited number of tour groups to enter starting May 23, with individuals allowed at a later stage. All visitors will need to be tested before boarding flights to Israel and show proof of vaccination.

LONDON — Scientists at Oxford University have released more data that confirm coronavirus vaccines made by Pfizer-BioNTech and AstraZeneca both significantly cut the risk of infection after a single dose.

Read More:  U.S. May Get More Ventilators But Run Out Of Medicine For COVID-19 Patients - NPR

In studies published on Friday, researchers said there was no apparent difference in the vaccines’ ability to reduce COVID-19 infection rates.

The research has not yet been published in a peer-reviewed journal but is based on data from nose and throat swabs taken from more than 370,000 participants in England and Wales between December and April.

The scientists said that three weeks after people had been given a single dose of either the Pfizer-BioNTech or AstraZeneca vaccine, the rates of all COVID-19 infections fell by 65%. The reduction was bigger after a second dose and the vaccines appeared to protect people against the variant that was first identified in the U.K.

Dr. Koen Pouwels, a senior researcher at Oxford University, noted there was some evidence of vaccinated people catching COVID-19 and that there was some limited spread of the disease from people who had been immunized.

The rising numbers are severely straining the supply of hospital beds and ICU capacity.

The record number of new infections came a day after a new daily high of seven deaths was announced. Four more deaths were announced Friday, bringing Thailand’s total to 121.

At the beginning of March, Thailand had 26,031 cases with double-digit daily increases, but a new outbreak sent the numbers skyrocketing.

Taweesilp Visanuyothin, a spokesman for the Center for COVID-19 Situation Administration, said Bangkok, with the highest number of cases, has only 69 empty ICU beds left out of a total of more than 400.

Under Thai law, infected patients must be held in hospital facilities, but even with the addition of field hospitals there are not enough beds.

ISLAMABAD — Pakistan has imported half a million doses of Chinese Sinovac vaccine after relying on donated vaccines, as its coronavirus cases surge, officials said Friday.

The country purchased the vaccine developed by China’s Sinovac Biotech, the National Command and Control Center said. It said a plane carrying 500,000 doses arrived at an airport Thursday.

Pakistan is currently in the middle of a new wave of cases which are flooding hospitals, mainly because of widespread violations of social distancing rules.

So far, the government has resisted demands from doctors that it impose a nationwide lockdown to contain the spread of the virus.

PERTH, Australia — The Australian west coast city of Perth will lock down for three days after a returned traveler was apparently infected with the coronavirus while in hotel quarantine.

The cause of concern was a 54-year-old man who arrived in Perth on April 3 on a flight from China and went into mandatory 14-day hotel quarantine.

A couple from India on the same floor of the hotel were infected with a virus variant identified in that country as more contagious. The variant spread to a mother and daughter from Britain who shared a room across a corridor.

The man was released from quarantine on April 17 after testing negative but tested positive after flying to the east coast city of Melbourne on Wednesday. The test result was announced on Friday.

A friend he stayed with overnight in Perth tested positive for the coronavirus on Friday, becoming the first case of community transmission in Western Australia in more than a year.

COLOMBO, Sri Lanka — Authorities in Sri Lanka have imposed lockdowns on several villages and postponed the reopening of state universities amid a sharp increase of COVID-19 cases.

According to a government statement, a small town and a village in the Kurunegala district, about 103 kilometers northeast of the capital Colombo were placed on lockdown. The local Lankadeepa newspaper reported five other villages in the area have been isolated.

Separately, the Education Ministry said the reopening of state-run universities will be postponed by another two weeks based on instructions from the health department. They had been scheduled to reopen April 27 after several months of being closed.

The number of positive cases rose to 672 on Thursday, pushing the nation’s total to 98,721 people infected with 634 fatalities.

BEIJING — China says three of its citizens working in the United Arab Emirates tampered with the results of their coronavirus tests required to return home.

A statement from the Chinese Embassy said the three, working in the main business center of Dubai, altered information provided by local clinics to show they had not been infected.

It said they were referred to UAE authorities for “seriously interfering with the prevention of epidemics and posing a significant risk to the health and safety of other passengers on the same flight.”

China has largely stamped out domestic infection but continues to report citizens arriving from abroad who test positive for the coronavirus. That comes despite demands that travelers prove they are virus-free, leading to speculation that test results are being falsified by citizens desperate to return home after more than a year of travel restrictions and demands they be quarantined for as many as 21 days.

China reported 19 new cases on Friday, all of them brought from overseas and most arriving in the major travel hubs of Shanghai and Guangdong.