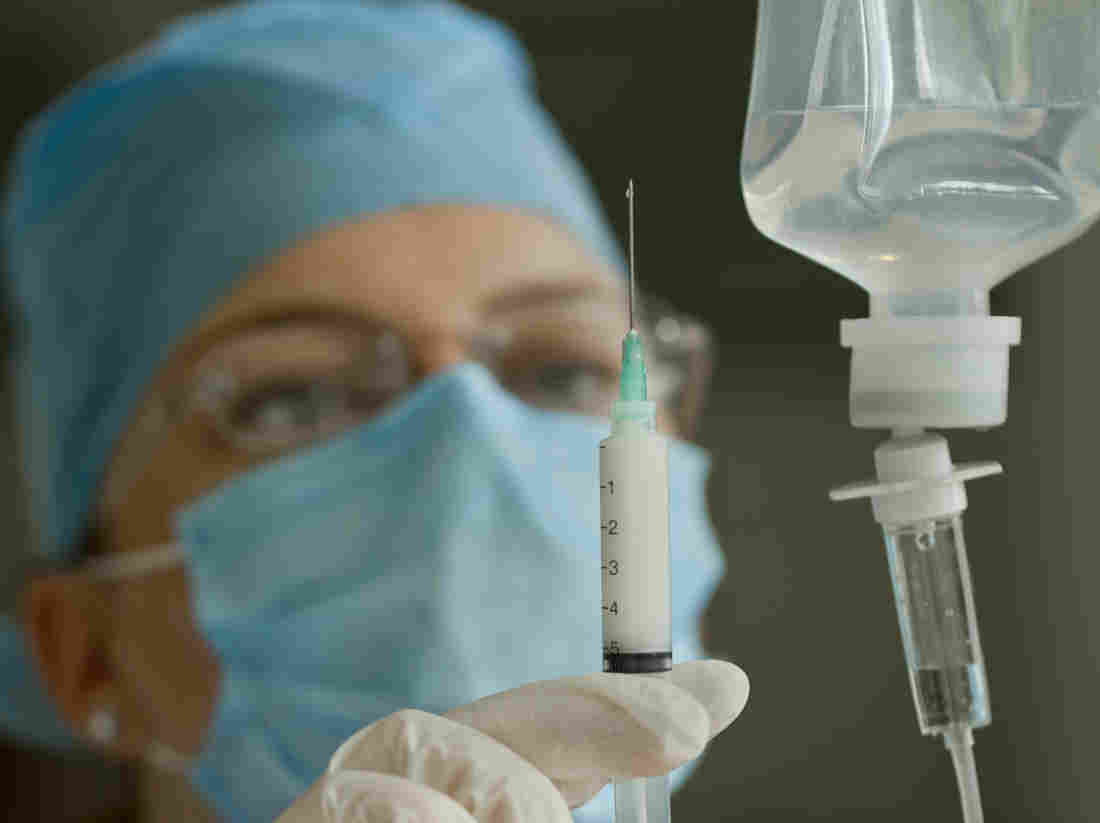 As hospitals across the country fill with COVID-19 patients, medical personnel are sounding the alarm about shortages of drugs essential to those patients’ care.

“We have seen an increase in demand on pharmaceuticals that’s unprecedented,” says Daniel Kistner, who manages the pharmacy program for Vizient, a group purchasing organization that negotiates lower prices with drug manufacturers. “Never seen anything like this before across the whole country.”

This week, Vizient released data showing dramatic spikes in demand for sedatives, pain medications, paralytics and other drugs that are crucial for patients who are on ventilators. According to Vizient’s study, the rate at which those orders are filled is lagging far behind the demand.

“We’re not at a rate yet where there’s just no drug,” Kistner says, “but we are quickly approaching it.”

One complicating factor: “Injectable drugs take a long time to make,” Kistner says. “For instance, there’s a 21-day sterility period needed for all injectable drugs. So it’s not something simple that you can do overnight.”

If you ramp up production of ventilators but don’t also get a jump on producing the necessary drugs, Kistner says, you have a problem: “We’re gonna build all these cars, but if we don’t have the gas, they can’t go anywhere.”

This week, Vizient sent recommendations to the Food and Drug Administration, urging the agency to expand access to drugs heavily used for ventilator patients. Among Vizient’s recommendations was that the FDA approve new lines of manufacturing or facilities to make these medications.

According to Kistner, the FDA has been receptive.

“We are now actively working with government agencies, such as the FDA, to explore strategies to increase supply of these critical drugs,” he says.

For a patient in acute respiratory distress, being put on a ventilator can be lifesaving. It’s also really unpleasant.

When patients are intubated, they’re given strong sedatives and pain medicine such as propofol and fentanyl, and sometimes paralytic drugs, as well.

Without those medications, Morse says, “Most people will reach for the [breathing] tube and try to grab it and pull it out. They may fight against having it in their mouth. And if they’re working against a breathing machine, it can actually damage their lungs.”

Now, with a surge of COVID-19 patients on ventilators, hospitals are burning through their supplies of those essential drugs.

As Morse watches her hospital’s supplies dwindle, she worries about her patients.

“It’s the human cost of being scared, maybe being aware on the breathing machine when you really shouldn’t be, that really keeps me up at night,” she says.

The drug shortages are especially acute in a COVID-19 hot spot like Albany, Ga.

Phoebe Putney Memorial Hospital in Albany has seen its caseload of patients on ventilators soar from the typical 12 to 15 to as many as 46 at one time.

Read More:  Can you take antibiotics that are expired

The problem isn’t just the overwhelming number of COVID-19 patients, Akers says. They’re also in such extreme respiratory distress that they stay on ventilators much longer — instead of a few days, it might be two weeks or more – and thus require that much more medication.

“The nightmare really is that I won’t have enough ventilators to treat them all at the same time,” Akers says. “And even if I get them on a ventilator, I won’t be adequately able to sedate them to know that they’re safe. And my real worry is that a lot of people will die as a result of that.”

The coronavirus pandemic has exposed a serious capacity problem in the pharmaceutical supply chain, according to Erin Fox, a pharmacist at University of Utah Health who has tracked drug shortages for years.

“Most of drug manufacturing is on a just-in-time schedule,” Fox says. “It’s pretty rare for companies to have more than a three-month supply, six-month supply on hand. And with the [COVID-19] surge, we are going to just burn through that at an incredible rate. A three-month supply could go in a week.”

Compounding the problem: There aren’t many companies that make these drugs. “These hospital drugs are very, very cheap. It’s just not a big profit-making arm for these companies,” Fox explains.

Just as the federal government has put pressure on manufacturers to produce more ventilators, Fox says, it’s time for the government to exert the same pressure on drugmakers.