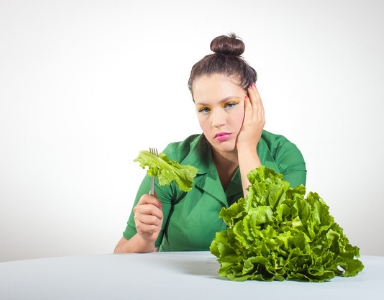 Why do vegans have a reputation for being boring killjoys?  Asks Healthista’s content editor Sharon Walker

Last week, I went to see the fireworks. After the display a group of friends gathered in the local pub for dinner. The special for the day was hog roast and as we were debating what to order I dropped in a mention that it was vegan month. Cue instant eyerolls.

‘Vegans are aggressive and they’re far too healthy. Glowing with health and they eat nothing but twigs and leaves. What’s wrong with artisanal cheese anyway?’ This was from my friend Dave. He was joking… I think. But it did get me thinking. What is it about vegans that so gets people’s goat?

Dave isn’t the only one with a ‘vegan problem’. There’s even a term for it: vegaphobia.

Earlier last week William Sitwell the editor of Waitrose Food magazine resigned after he was caught mocking vegans suggesting a piece exposing their ‘hypocrisy’, joking that they should be force-fed meat and killed one by one. He’d sent an email saying as much to a vegan freelance journalist, Selene Nelson, who’d pitched a plant-based recipe feature. The email landed on BuzzFeed News and went viral.  Sitwell made his apologies, but it wasn’t enough to save his job.

‘There’s even a term for people that hate vegans – vegaphobia

I imagine anyone will think twice before airing their vegan gripes in future. Or maybe Sitwell’s resignation will only serve as grist to the mill. Another reason to harang vegans as humourless bores, unable to take a joke, ‘so woke’ they can’t have fun.

(If you don’t know what ‘so woke’ means don’t worry I didn’t either until last week when I was put in the picture by my in-the-loop editor, but now it’s everywhere I look, this BBC spoof popped up on my Facebook feed, alongside a discussion about whether Sitwell should have resigned over his ‘joke’, or not.)

Vegan bashing doesn’t really make sense to me. I can see why vegans might get really pissed off with meat eaters – we’re the ones depleting the planet, supporting an industry that tortures innocent animals. What have meat eaters got to complain about?

But complain they do.

Another friend of mine encountered the anti-vegan mafia first hand when she announced at dinner that she was trying the vegan lifestyle for a feature. Her friend’s husband came down on her like a ton of bricks, it was as if she’d announced that she’d joined Isis or threatened to bomb the local butcher’s and it wasn’t as if she’d turned up at his house and turned her nose up at his food – this happened in a restaurant. Of course you do get the odd extremist, but most modern vegans aren’t going around moralising or admonishing fellow diners.

There’s something about this reaction that reminds me of the times I’ve given up booze and some old drinking buddies, with whom I’d usually share a glass of wine (or perhaps two), take it as a personal insult, it’s as if your decision to forgo alcohol is an attack on everything they stand for.

‘Oh come on don’t be SO boring.’ They’ll nag insisting you join in. When what they really mean, is: ‘Please don’t remind me that I’m pickling my liver in gin and behaving like an idiot.’   If they’re going down on the booze laden Titanic, well they’ll be damned if they’re going to let you escape in the life raft.  Perhaps that’s what’s going on with the vegan bashers.   Why else would some committed carnivores take their veganism so personally – unless of course behind the vegan bashing bravado was the scary reality that actually vegans are right?

Read More:  Who can cialis have

I’m an occasional meat eater myself, or reducetarian as it’s dubbed these days, though I can see vegans have the moral high ground. Producing just one hamburger uses enough fossil fuel to drive a small car 20 miles.

Pretty soon the planet will run out of resources.  There’s not enough water for all those cows or land to raise the livestock we need to feed all meat eaters and when that happens remaining carnivores amongst us will be forced to eat worms.  Then who’ll be laughing?

And what’s this about vegans being killjoys?

I’m sorry I just don’t buy it.  Far from being boring bores my vegan friends are the radical non-conformists. My most ardent vegan friend loves animals so much she volunteered at a bat sanctuary – a bat sanctuary – you read that right, for six weeks, and started the world’s first cat festival, Catfest, complete with a cat adoption lounge and Sixties Go-Go dancers (she’s also a fan of the Sixties and figured why not combine her interests?).

I once worked with her on a travel magazine and it didn’t matter what story we ran, it would always somehow end up with a cat in it (I exaggerate only slightly), much to the perplexed consternation of the publisher.

Got IBS? 6 things this TV doctor says you must know

Dynamic stretching video to help you warm up before a workout

5 healthy restaurants in London with the fun factor

The new shorts that helped this woman’s urinary incontience