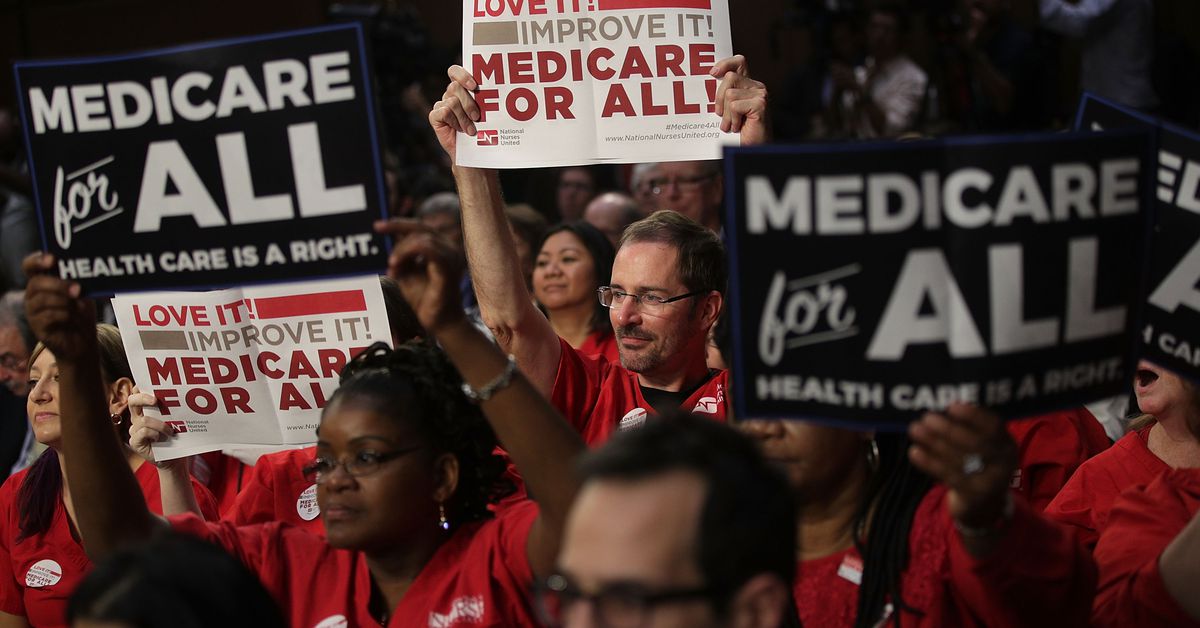 Adam Gaffney is the president of the Physicians for a National Health Program (PNHP) — and a single-payer advocate whom I’ve found to be especially clear-eyed about what a single-payer system in the United States can and can’t do.

Gaffney works as a critical care doctor and supports Medicare-for-all for lots of reasons. He thinks it will improve access to medical services and make the United States a more equitable place to live.

But he also doesn’t expect that Medicare-for-all would amount to huge cost savings for the United States, at least in the short-run. He isn’t sure whether we can ratchet down our current health care spending (17 percent of the economy) down to the same level as Canada (where they spend about 10.5 percent of gross domestic product on health care).

“It would make my position as a single-payer advocate a lot easier if I could say, ‘hospital spending will fall 50 percent with Medicare-for-all,’” Gaffney says. “But that’s not realistic.”

I saw Gaffney make a short version of this argument in a New York Times article last week, and knew I wanted to get the long version. So I gave him a call and we spoke about what cost-savings he thinks are realistic, how we get there, and how his views on this have changed in the past decade.

What follows is a transcript of our discussion, lightly edited for length and clarity.

Let’s start with something you said to the New York Times for an article last week, that I thought was pretty interesting. This was for an article about possible funding cuts that hospitals might face if we moved to a Medicare-for-All system. And the thing you told the Times was, “We don’t need the insurers, but we do need the hospitals.” Essentially saying, you can’t get too aggressive on cutting hospital revenue. Explain to me why you think that is, and what kind of cuts would be realistic in a Medicare-for-all system?

It would make my position as a single-payer advocate a lot easier if I could say, hospital spending will fall 50 percent with Medicare-for-all, but it’s not realistic. I think there are savings that hospitals can achieve through efficiencies. If we move toward a global budget system, which is what is described in the Jayapal bill, you maximize the administrative savings.

We should be talking about the things we want hospitals to spend less of their revenue on, rather than focusing on the individual prices of services. If we’re going to say, we want to shrink hospital budgets, well, what things do we want the hospital to spend less money on? If you just take the average hospital and simply shrink its budget, you have to make sure it’s happening in the right way.

The way I think about it is we need a new way to finance hospitals. We need to transform them. We can achieve savings in administration costs, and we can finance new capital projects from a different source that isn’t hospital profits. But beyond that I think it’s not feasible to make claims about more dramatic reductions in national health expenditures.

What do you think are the risks of getting budgeting wrong in a Medicare-for-all system? You mention the global budgets that are in the Jayapal bill, which are pretty similar to Canada, and essentially give a hospital a lump sum to take care of patients. How do you decide how big that budget is — and know that it’s the right amount to pay the hospital? Is there a risk of some hospitals closing?

It might. And if I think I were speaking to you 10 years ago, I would have said something different. I would have thought well, hospitals in Canada can do this for half as much, why don’t we just do that. But it’s just not realistic.

What changed your mind?

Read More:  Can toothpaste cause osteoporosis?

I think awareness of the fact that every dollar spent on health care is being spent on something, so you have to be willing to put your finger on where do I want the reduction to come from. We can eliminate profits. Fire departments don’t have profits, schools don’t have profits. We can get rid of advertising, we can get rid of bonuses, about 50 percent of administrative spending. But beyond that, I’m not going to claim they can produce the same amount of health care for less. I can’t say when that will happen.

Do you see a path for the United States to spend the same amount of money on health care that Canada does? Can we have Canadian prices here?

We’re getting into a new stage of the single-payer discussion. At first the emphasis was getting the idea out there, and pushing it into the center of the policy discussion. We weren’t quite as focused on some of the details of how the system would run, and that is what we’re working out now.

I know another way that the plans that your group and Sen. [Bernie] Sanders support differ from many other countries is that they have no type of co-payments or cost-sharing for medical care. When you go to the doctor, you don’t pay a fee. How important is that element of the plan to you? Is that something you could see changing in negotiations?

Ten years ago, I would have said co-pays would be fine. I wouldn’t have been in favor, but I would have thought, what’s the big harm.

Since then I’ve come to realize there are two possible ways to do cost-sharing. It can be set so low that it has no effect on people’s use of health care. You could have a co-pay that costs a nickel. That won’t deter anyone from going to the doctor, so what function is it serving? Then you need a guy to collect all the nickels and carry them down to the bank, and that costs more in terms of administering the nickel co-pays.

If the co-pays are going to be high, then you start asking, why are we trying to make a financial barrier to people using health care? There are decades of data that show that cost-sharing makes people use less health care, but it doesn’t just reduce low-value care. It reduces high-value care, too. There was a recent study showing that high deductibles caused women to have a delay in breast cancer diagnoses.

I could go on and on about this but the point is it just reduces care indiscriminately. That’s how I view it: that cost-sharing reduces use. It keeps people from getting the medicines that they need.

Let’s talk about another design choice in the plans from PNHP and legislators: the set of benefits. The plans you all are proposing cover a wide array of benefits including long-term care, vision, dental. Do you think it’s realistic to build a system like that? Or at some point, in the political process, we’ll see some benefits drop off because a system with more benefits costs more money?

There is no question that, the more you cover, the more expensive it’s going to be. I do think that given how rich our country is, we can afford universal dental care. There are other countries that have universal long term care, like Germany and Japan. But obviously we’re going to have to push to keep it comprehensive.

When they created the National Health Service in Britain, it included dental and vision and all sorts of medical services. But then they added co-pays back for prescription drugs. It was thought the costs were getting excessive. I think co-pays should be kept out of this entirely, but it’s not going to be easy, there is a big health care fight ahead.

By signing up, you agree to our Privacy Policy and European users agree to the data transfer policy. For more newsletters, check out our newsletters page.

Are you an Obamacare enrollee interested in what happens next? Join our Facebook community for conversation and updates.