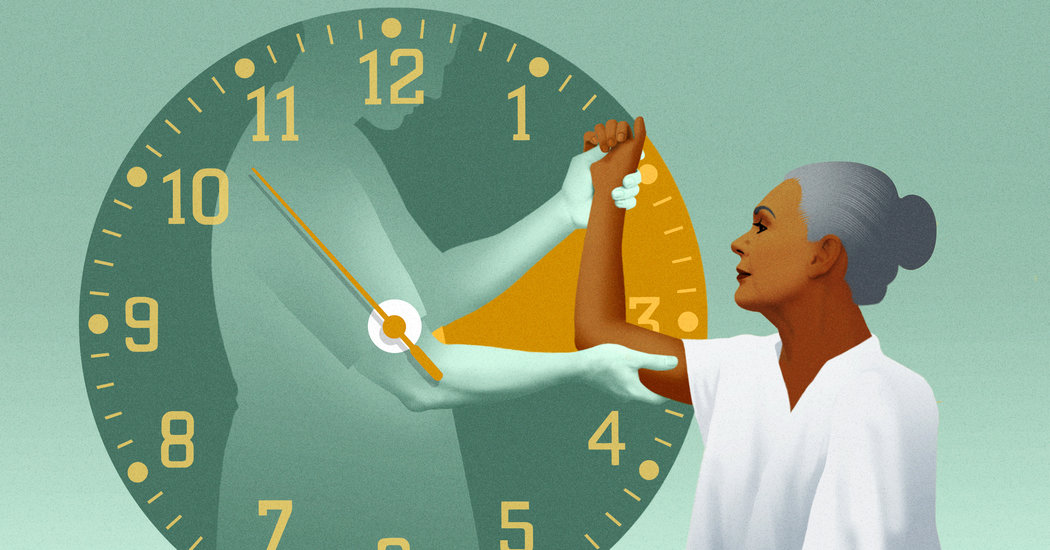 In late September, a woman in her 70s arrived at a skilled nursing facility in suburban Houston after several weeks in the hospital. Her leg had been amputated after a long-ago knee replacement became infected; she also suffered from diabetes, depression, anxiety and general muscular weakness.

An occupational therapist named Susan Nielson began working with her an hour a day, five days a week. Gradually, the patient became more mobile. With assistance and encouragement, she could transfer from her bed to a wheelchair, get herself to the bathroom for personal grooming and lift light weights to build her endurance.

That progress ended abruptly on Oct. 1, when Medicare changed its payment system for physical, occupational and speech therapy in nursing homes. Ms. Nielson, employed by Reliant Rehabilitation, which supplies therapists to almost 900 nursing facilities, said that her allotted time with the woman was reduced from 60 minutes to just 20 or so minutes a day, not even long enough to help her leave her bed.

“I’m not able to do my job,” Ms. Nielson said. “This person had the potential to do more, and I couldn’t help her.”

The same lament is being expressed by therapists nationwide. Professional organizations, including the American Physical Therapy Association and the American Occupational Therapy Association, report that the new Medicare policy has prompted some nursing home chains and rehab companies to scale back the treatment they provide to patients, and to lay off therapists or switch them to part-time status.

The organizations’ members are also speaking out about the pressure they feel to conduct therapy in groups rather than one-on-one. Medicare allows up to 25 percent of patients’ therapy to take place in groups — and some employers reportedly began requiring that percentage on Oct. 1, whether therapists thought their patients would benefit or not.

“Patients’ needs didn’t change overnight,” said Kara Gainer, director of regulatory affairs for the American Physical Therapy Association. “So what changed?” Although some companies have reacted responsibly to the new system, she said, “some are bad actors who put profits before patients.”

Her members have responded with “concern, fear, outrage,” she added. A new Facebook group, Rehab Therapists for a Union, swiftly attracted more than 20,000 members. A petition on Change.org, asking the Department of Health and Human Services to intervene, garnered 80,000 signatures.

Before Oct. 1, Medicare reimbursed nursing homes for therapy based on the number of minutes provided to each patient, up to 720 minutes a week. The goal is to help patients regain mobility and the ability to perform daily tasks, so that they can safely return home.

For years, however, federal investigators and advisers have reported that nursing homes frequently provided the maximum number of minutes of therapy, regardless of whether patients needed that much treatment.

“Therapy was sort of a profit center,” said Sharmila Sandhu, who directs regulatory affairs at the American Occupational Therapy Association. “The more therapy, the higher the reimbursement.”

The new approach, called the Patient-Driven Payment Model, eliminates such incentives; now facilities are paid based on patients’ diagnoses and characteristics. In an email, a spokesman for the Centers for Medicare and Medicaid Services called the P.D.P.M. “a historic reform” that will “appropriately reflect each resident’s actual care needs.”

“This is a well-intended policy, a real sea change in how we pay for care,” said David Grabowski, a health care policy researcher at Harvard Medical School who is organizing a study of the policy’s effects.

But about 70 percent of the nation’s 15,000 or so nursing homes are for-profit and have proved adept at maintaining profit margins despite policy shifts, said Toby Edelman, senior policy attorney at the Center for Medicare Advocacy.

Without volume incentives, nursing homes may direct therapists to administer less therapy and to see patients in groups, reducing the number of professionals required and lowering labor costs.

“The risk before was overprovision of therapy,” Dr. Grabowski said. “Now the real concern is underprovision.”

Genesis HealthCare, one of the country’s largest providers of skilled nursing, has eliminated about 500 therapist positions since the Patient-Driven Payment Model took effect. “We have found that the appropriate use of group and concurrent therapy can actually be more efficacious than one-on-one therapy in many cases,” a spokesman for the company said in an email.

Maybe. A number of studies have shown that group therapy (in which several patients work on the same task) or concurrent therapy (where the patients work on different tasks) can indeed be helpful. But therapists have insisted that their clinical judgments, not the dictates of employers, should determine who gets what kind of therapy, and how much.

The Centers for Medicare and Medicaid Services acknowledged as much in its final rule adopting P.D.P.M.: “We agree that therapists are the most appropriate professionals to determine the mode of therapy a patient should receive and that professional judgment must be trusted and used” in nursing facilities.

Therapists contend that, instead, their judgments are being overridden. Alexander Zwick, a physical therapist at JDT Villa, a rehab facility in Lincoln Park, N.J., said that after Sept. 30, patients “were getting less therapy because people on the business side were coming between patients and professionals.”

“The time for the patients dropped drastically,” Mr. Zwick said, from an hour a day to 30 to 45 minutes: “Same patients, same diagnoses, different payment system.” (JDT declined to comment.)

Therapists have also reported that, where facilities have substantially reduced staffing, the workload of the remaining workers has become unmanageable.

Medicare officials have repeatedly said they will monitor the new system. “Significant changes in the amount of therapy provided” or “the manner in which it is delivered” could trigger reviews and policy changes, a Medicare spokesman said in an email.

Read More:  Where was lorazepam come from

Nursing facilities already face potential financial penalties, as well as lowered ratings on Medicare’s Nursing Home Compare website, if they perform poorly on certain outcomes. For instance, Ms. Nielson said that her patient developed a pressure ulcer, or bed sore, and was readmitted to the hospital; that will show up on annual surveys.

(In an email, a spokesman for Reliant Rehabilitation said that the company had “provided guideposts for care management under P.D.P.M.” and had trained therapists in the benefits of group therapy. “We encourage them to use their clinical judgment to determine when it is appropriate.”)

But some consequences don’t show up on surveys. Consider a patient Mr. Zwick was working with, an 89-year-old woman with heart failure. “She was motivated,” he said. “She wanted to get home. She had a wedding to attend.”

Suppose, after her discharge, she couldn’t walk “household distances” or use the toilet independently because he’d been instructed to shorten her therapy sessions from 60 to 45 minutes a day — what would happen to her?

Even if she managed to avoid a fall or re-hospitalization — the kind of red-flag events that attract Medicare’s attention — her quality of life could suffer. She might need to pay out of pocket for home care; the burden on family caregivers might increase.

Mr. Zwick, unable to stomach such prospects, resigned last month to work for a nonprofit home care agency. But he may encounter some of the same issues there. On Jan. 1, Medicare is instituting a similar new reimbursement system for health care and therapy at home.