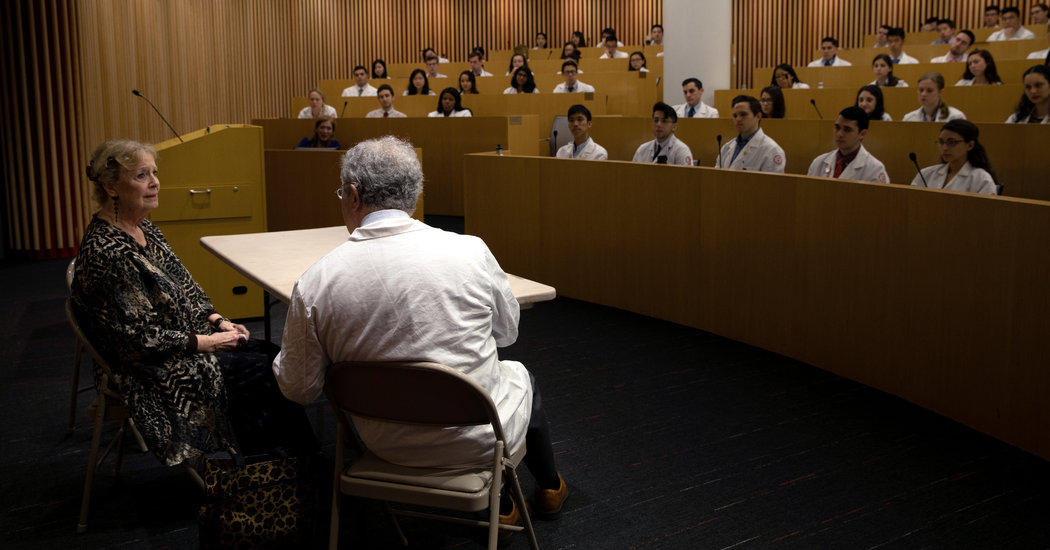 Whatever the cluster of second-year students at Weill Cornell Medicine in New York expected to hear from an 82-year-old woman — this probably wasn’t it.

At first, Elizabeth Shepherd, one of several seniors invited to meet with future doctors in an anti-ageism program called “Introduction to the Geriatric Patient,” largely followed the script.

As student Zachary Myslinski, 24, read off questions from a standard assessment tool, she responded in matter-of-fact tones.

Macular degeneration, replied Ms. Shepherd, a working actor who also teaches Shakespeare at the Stella Adler Studio of Acting. But she was getting treatment.

Just one, when she missed a bottom step. “In the subway! In public! That was no fun.”

Ms. Shepherd, elegant in an animal-print tunic and dangly earrings, easily tucked her hands behind her head, displaying good range of motion. She remembered three words — “pineapple, blue, honesty” — when asked to recall them several minutes later in a cognitive test.

But after telling her rapt audience that she’d raised a son born “out of wedlock” in 1964 and had divorced twice, she added, “I emigrated to Lesbianland for a little while in my 50s.”

Eventually returning to heterosexual relationships, she continued, she met a 90-year-old online and had “the most wonderful summer with this man.” She’s now involved with a 65-year-old, she added. But “he’s in Afghanistan at the moment, so my sex life is not as active as I’d like.”

Dr. Ronnie LoFaso, the faculty geriatrician guiding the session, said, “This is taking an interesting turn.”

But that was the point, really.

“It’s important that they don’t think life stops as you get older,” Ms. Shepherd told me afterward. “So I decided I would be frank with them.”

Dr. Ronald Adelman, co-chief of geriatrics at Weill Cornell, developed this annual program — which includes a theater piece and is required for all second-year students — after he realized that medical students were getting a distorted view of older adults.

Read More:  What does valium have in it

“Unfortunately, most education takes place within the hospital,” he told me. “If you’re only seeing the hospitalized elderly, you’re seeing the debilitated, the physically deteriorating, the demented. It’s easy to pick up ageist stereotypes.”

These misperceptions can influence people’s care. In another classroom down the hall, 88-year-old Marcia Levine, a retired family therapist, was telling students about a gastroenterologist who once dismissed her complaints of fatigue by saying, “At your age, you can’t expect to have much energy.”

Then, in her 70s, she switched doctors and learned she had a low-grade infection.

At least 20 medical schools in the United States have undertaken similar efforts to introduce students to healthy, active elders, said Dr. Amit Shah, a geriatrician who helps direct the Senior Sages program at the Mayo Clinic School of Medicine.

The programs take many forms, from Weill Cornell’s two-hour introduction to a semester-long curriculum at the University of North Carolina School of Medicine.

“You hear that people are not worth treating because of their age.”

Some schools, like the Medical University of South Carolina and the Icahn School of Medicine at Mount Sinai, match students with older patients they follow throughout their four-year educations, making home visits, accompanying their “senior mentors” to doctors’ appointments, and visiting them if they’re hospitalized.

Though the efforts can be voluntary or mandatory, can emphasize clinical skills or encourage new perspectives, they reflect broad agreement on the problems that ageism brings.

In health care, “you hear a lot of infantilizing language: ‘sweetie,’ ‘cutie,’ ‘honey,’” said Tracey Gendron, the gerontologist who started the senior mentoring program at Virginia Commonwealth University School of Medicine. “You hear that people are not worth treating because of their age.”

Dr. Adelman has recorded and analyzed doctors visits in which a spouse or adult child accompanies a patient and begins asking and answering the questions. “The older person, who is cognitively fine, is just excluded, referred to as ‘he’ or ‘she,’” Dr. Adelman said. “It can undermine the relationship between the older patient and the doctor.”

More broadly, medical research often continues to exclude older people, forcing their doctors to make educated guesses about drugs and procedures, and how much they will help or hurt.

Yet most doctors, if they’re not pediatricians, will spend much of their careers working with older people, becoming — to borrow a phrase from Dr. Donovan Maust, a geriatric psychiatrist at the University of Michigan — de facto geriatricians.

If medical students specialize in pulmonology, they’ll find that about 35 percent of their patients with chronic obstructive pulmonary disease are over age 65, as the Centers for Disease Control and Prevention has reported.

Endocrinologists treating diabetics will learn that almost 40 percent will be 65-plus. In oncology, more than half of the survivors of all types of cancer are over age 65.

We’ll never have enough geriatricians to care for this growing older population, in part because it’s hard for doctors to pay off student loans and make a living when virtually all their patients are on Medicare.

Last year, there were just 7,279 certified geriatricians in the United States, only about half practicing full time. The supply is rising only modestly, while the demand will increase a projected 45 percent by 2025, according to the American Geriatrics Society.

Read More:  How much yoga do you need

Accordingly, many anti-ageism programs mandate participation by all incoming medical students. “The elderly are who they will be caring for,” Dr. Adelman said.

The efforts appear effective. Administrators point out that in longer programs, students and seniors often form friendships, sharing pizza or movies outside of required interviews.

An evaluation reviewing 10 senior mentoring programs, published in the Journal of the American Geriatrics Society, reported that “the universal goal of positively influencing student attitudes toward older adults was resoundingly achieved.”

“Her candor and openness were incredible,” said Jason Harris, 25. “An organ is an organ. A patient is who we’ll be dealing with in real life.”

“It made me more interested in working with an older patient population,” said Mr. Myslinski.

Why, then, aren’t there more such initiatives in the nation’s 151 M.D.-granting medical schools? They’re not particularly expensive, the evaluation found, and older people clamor to take part.

They do involve a fair amount of administrative time. And they require awareness of the particular challenges of this phase of life.

Ms. Shepherd was frank about that, too.

When she turned 80, she told the students, “I began to realize, this really is different. To know that there are not so many years ahead. To think about how I want to spend the rest of my days. There was a new vulnerability.”

She appreciated that they had listened, she said afterward, calling the session “a gift to us, as well as to them. It’s an acknowledgment that we are important and of interest.”